They Came From The Public Domain ... 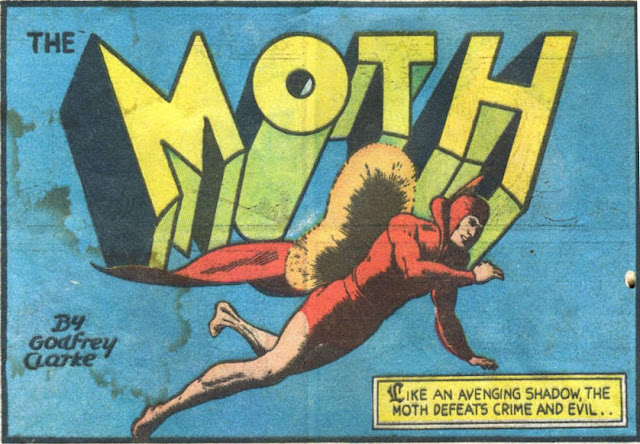 Former Golden Age superheroes who’ve recently fallen into the public domain have been showing their faces all around comics lately. Excepting the few who popped up in mildly copyright-defying form in Bill Black’s Americomics or Malbiu’s old Protectors series, among others, there’s Alan Moore’s cast of Terra Obscura characters, while Alex Ross and Jim Krueger have been spinning a complicated (and some might rightly suggest “incomprehensible”) superhero soap opera with a cast of bazillions in Project: Super-Powers and the original boomerang-slinging Daredevil has made a series of appearances in Erik Larsen’s Savage Dragon.

More than a few (hundred) of the Golden Age’s lesser lights, however, have failed to make an appearance in the big new era of combing other people’s long-dead ideas for cash money. Here’s a list of a few I’m dying to see make a reappearance in modern comics:

Minimidget
That’s “Minimidget” as in “Smaller than your average midget”. As far as midgets go, he makes ‘em look like giants, that should be your take-away from this. Is being smaller than a midget a super-power? Well, if not, let’s see you try it.

Minimidget – a.k.a. The Super-Midget (except that he is not super in any capacity) or The Miniature Man (okay, I can accept that) – has one of the weirdest character arcs in comicdom. Minimidget first debuted as Jack Rhodes, adventurer, in the pages of Amazing Man #5 and – later that same issue – appears again in a story which takes place some time after Rhodes and his girlfriend Rinny (wait what?) have been abducted, shrunk and turned into poison-needle-bearing nighttime assassins by some mad scientist of the other.

Just to make sure you catch this: The part of the story where Jack Rhodes is captured and transformed and enslaved by a mad scientist and turned into a pint-size murderer-by-command? They didn’t show that part.

By his next appearance, Minimidget is back on the side of the angels, and is so small that maybe he can answer that question for us about how many of ‘em can dance on a pin. He and Rinny make themselves useful to the rest of the regular-sized world by flying around in their toy plane passing on messages, getting attacked by wildlife and having difficulty doing everything.

Everyone they meet or help is so enthusiastic about supporting them that the stories take on this air that everyone feels really bad for Rhodes and Rinny, so they want to support them for every little thing they do. “You didn’t get killed by a bird,” they may say, “Good for you! Good for you!”

Dash Dartwell, the Human Meteor
As a run-of-the-mill comic book speedster, Dash Dartwell is missing the flashy costume worn by your average Whizzer or Flash. He makes up for it by sprinting everywhere in his double-breasted blue suit, which after even a few sprints across town probably smells like the underside of a brisket’s armpit.

I don’t actually like Dash Dartwell or anything about his origin or narrative, but I am perpetually amused at the manner in which they draw him running: Legs fully extended both directions, as far as they can go, like a jointed wooden toy being tossed carelessly through the air. I could read a whole book of that.

The Iron Skull
Golden Age comics had more than their share of robotic super-humans, from Bozo the Robot to Robotman to one or two others who – and I stress this as being practically key to their popularity – made sure to put the word “robot” somewhere in their name. This is handy when you’re a reader trying to figure out exactly why some cross-eyed goon is cramming his pumpkin through brick walls.

The Iron Skull was apparently a robot – or possibly, like Robotman, a robot body with a human brain attached – but within the actual pages of his stories they sort of neglected to mention that. So what you end up with is the comic book adventures of a very smartly-dressed grim-looking guy with a Jack-O-Lantern nose suddenly bashing his noggin violently against flat surfaces. This is not a super-power, necessarily, this is a symptom deserving of medication.

I’ll be honest with you, though - as super-powers go, it’s not a barker. In the story cited in these panels – Amazing Man #22 – Iron Skull bashes through no fewer than three walls with his head and then punches through the top of a sedan feet-first. He’s got panache, you can’t deny that.

The Moth
I am being deadly serious when I say that, of all the characters in this list, The Moth is the one I most want to see brought back in some capacity.

Not to be confused with Steve Rude’s stuntman superhero, the Moth is apparently a grim figure of justice, appearing in the night to redress terrible wrongs and visit horrible vengeance on the cruel and criminal. You know, LIKE MOTHS DO. It also helps that he wears fluffy orange wings and a swimming cap and little velour shorts. And a cape. Like moths do.

In the story from Mystery Men #11 (1940), The Moth – “Like an avenging shadow” – flutters awkwardly above the mansion of the widow Nancy Torrence, whose nephew and girlfriend plan to murder her in order to swipe some old magazines she keeps under her recliner or something. This part is vague.

What also is vague is how the Moth knows any of this is happening or what’s going on – at one point, choosing to actually foil the attempted murder rather than continually flutter past the mansion’s massive picture windows (which he spent valuable time beforehand endlessly doing), The Moth collects the intended victim and has to grill her as to the misdeeds planned this evening. That’s right – EVEN THE INTENDED VICTIM KNEW MORE THAN THE CRIME FIGHTER.

Better than that, The Moth then leaves the elderly old woman in a tree for AN HOUR (no joke, that’s what the caption said) while he drags her nefarious nephew and his cold-hearted better half down to the police station, then returns only to inform her that, um, well … he can’t have them arrested. She’ll need to go downtown and do that. But AVENGING JUSTICE or something, he’s useless, it actually would have been better if he’d walked to the mansion and called the cops.

DASH! Ah-Ahhhhhhh! He'll save everyone of us!

Fluffy wings AND a cape AND swim trunks WITH long sleeves? Not to mention that collar! Faaabulous!

And I thought the "is my mouth bleeding?" look of the short-lived android Hourman or "ladies bathing suit" look of the Hal Jordan Spectre were freaking embarrassing...

Embarrassing nothing, that guy is my new favorite. Now I've got an idea for the next Con Sketchbook to haul around ...

I just have to write in and say that I'm not a fan of comics as such, but I love your writing. There are few things in this world that consistently make me laugh as much as GAF. I would write more, but I just remembered that I left an old lady in a tree outside her house.

If Your Humble Editor is being honest, he's not sure that he's all that big a fan of comics as such anyway, but thanks for the kind words.