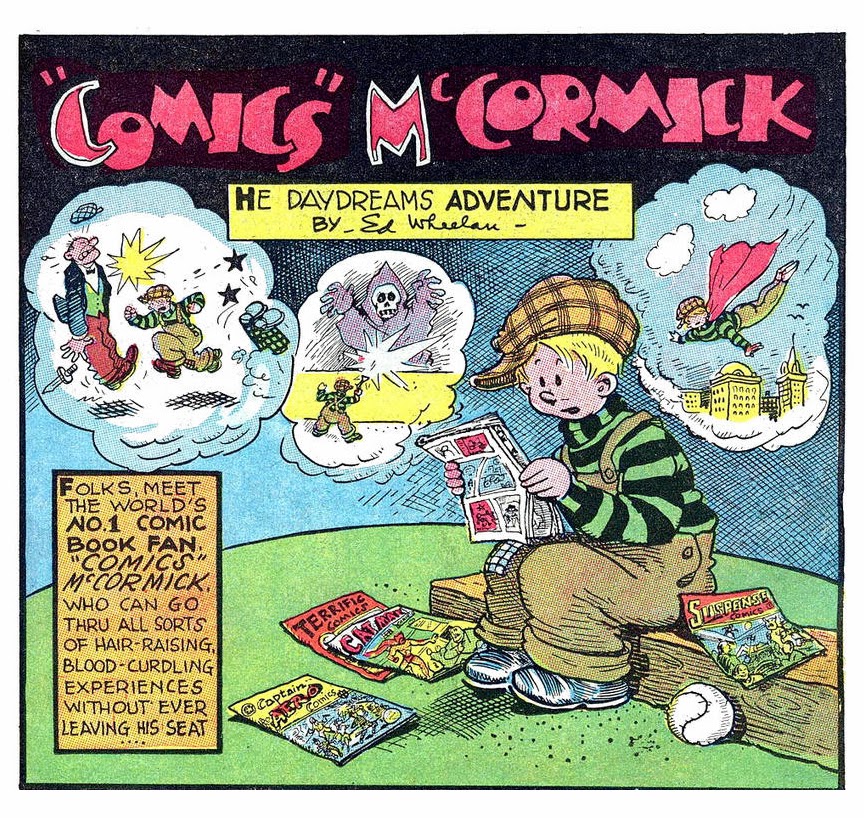 Most of the comics which feature comic book fans and collectors as their protagonists aren’t typically all that kind – consider the number of comics and television shows you’ve encountered where the avid collector is portrayed as an unclean, juvenile wretch, an obsessive-compulsive criminal, or just an all-around unlikable jackass. Even the few where an avid comic book aficionado is the hero have a tendency to play the protagonist for laughs as a well-meaning but incompetent dolt.

Well, not so with “Comics” McCormick, one of – if not THE – first comic book fan to be the star of his own comic feature. Created by Ed Wheelan as a supporting character in a number of books (EC’s Fat and Slat and Land of the Lost, Holyoke’s Catman and Terrific), Comics is sort of a pint-sized Walter Mitty with his imagination fixated firmly on four-color misadventures. Billed as the world’s #1 comic book fan, “Comics” - even his mother and sister call him that – often finds himself lost in idle fantasy, battling terrible super-menaces, spies and crooks either alongside famous (more or less) heroes or adopting super-powers of his own.

If my math is correct, there were only nine “Comics” McCormick stories ever published, but he packs a colorful catalog of criminals and comrades into those brief appearances – Alongside heroes like Captain Catapult, Voltage (Man of Lightning), Waterman and Marvel Maid, “Comics” helps stick it to baddies like the black-caped Super-Robot, the insidious Dr.Hunchback and the sinister Octopus (bearing a resemblance to the Octopus appearing in this week’s Batman Leads An Interesting Life feature – see , I told you to bear with me!), and likewise picks up a few super-powers of his own, including invisibility, electric powers and a quick turn as a human bullet! 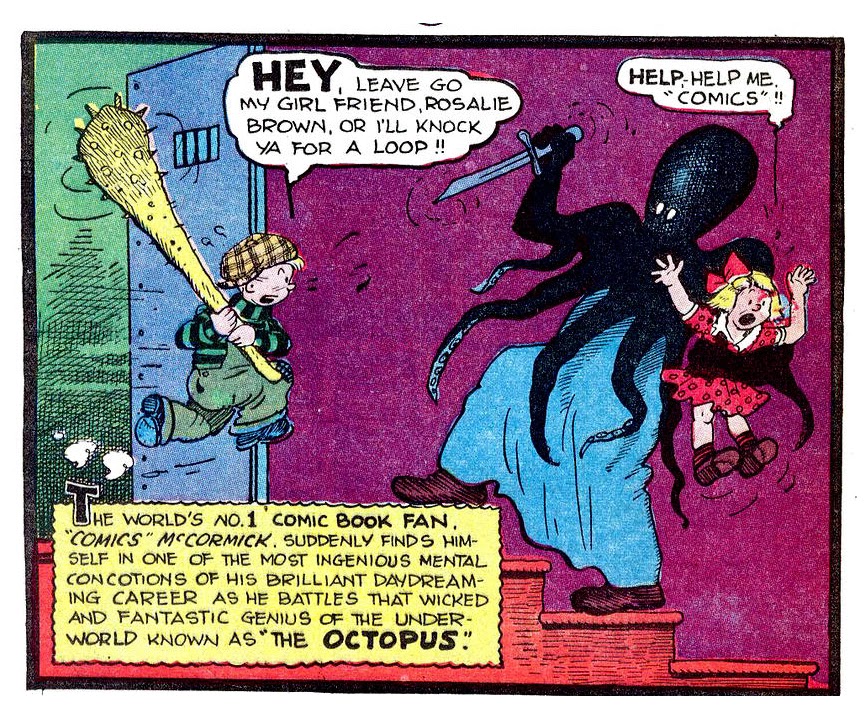 Like other successful light comedy pieces from the Golden Age – say, for instance, Sheldon Mayer’s excellent Scribbly or John Stanley Little Lulu, of which “Comics” McCormick put me in mind on more than one occasion – the strength of the series lies not only in its imagination but in its supporting cast. Like Scribbly and Lulu, “Comics” has a large number of women in his cast – he has a pair of boy chums (the chubby schoolmate Wilbur and the their cook’s son, Ajax), but his mother, sister, his girlfriend Rosalie Brown and family cook comprise the remainder of his dramatis personae, with only kindly Officer Kelly providing an adult male influence on the strip. Even “Comics” nemesis is his comics-disapproving schoolteacher, Miss Slate.

In fact, among the high adventure and boyish daydreams, there’s a surprisingly timely message about inclusiveness in “Comics” McCormick – when Rosalie is submitted for membership in the boys’ “Little Conquerors Athletic and Reading Club”, Wilbur raises a fuss about admitting a girl to a boys club – “Girls don’t fit in as Conquerors, shux, anybody knows that!” he argues. “Comics” is quick to list off a parade of superheroines in his defense – “How about Super-Dame a’ Lady Wonder an’ The Pink Pigeon an’ the Crimson Canary? How about them, huh??!!” he demands of his chastised pals, who promptly vote to allow Rosalie in, to her delight.

With comic fandom currently struggling to cast off its image as an aggressively exclusionist, intensely gatekeepered boys’ club, there are probably few other comics characters so well-suited to embody the appeal and inclusiveness of the medium than “Comics” McCormick, a character who is just aching for a comeback…

I'm just glad Comics never got his hands on Watchmen.