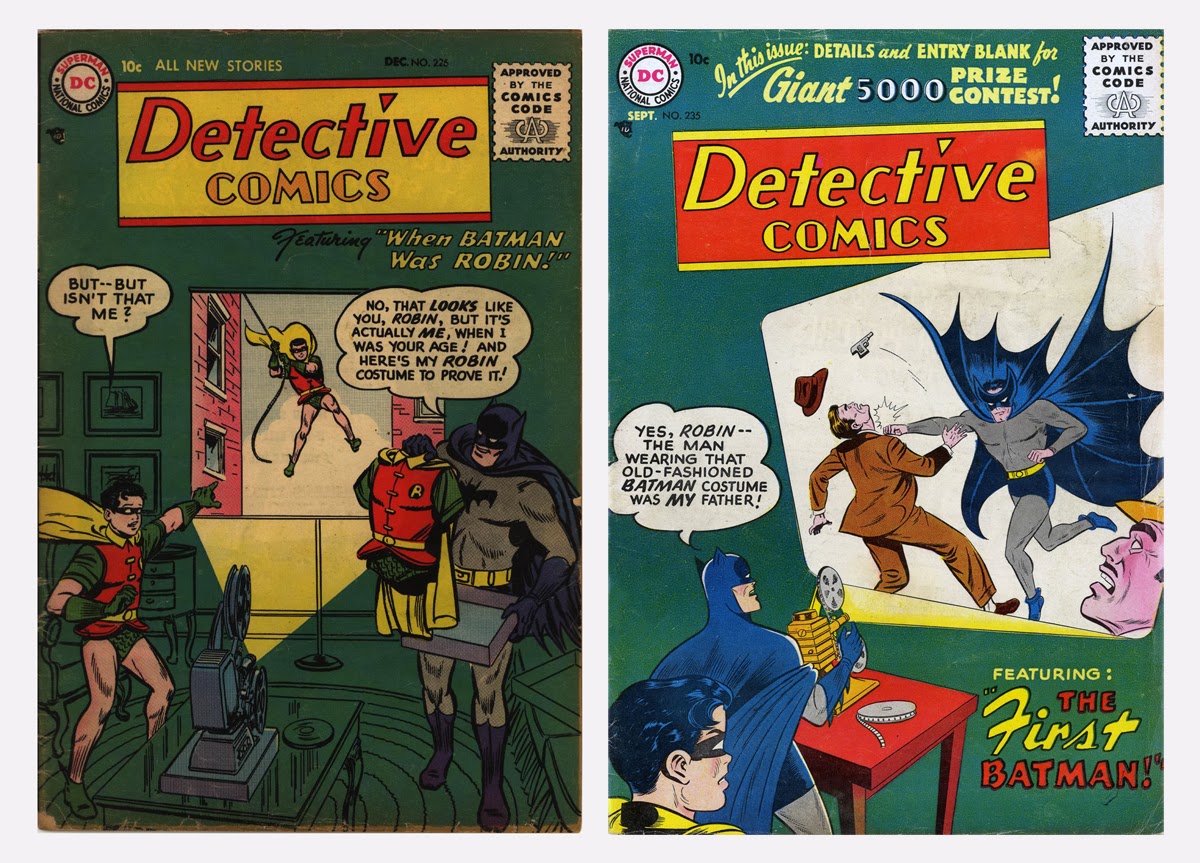 I’m trying to decide what it would feel like to be a child flipping through the old family photo albums and to discover pictures of your father at your age wearing absolutely the same clothes you’re currently wearing, and then flipping further on to find photos of your grandfather wearing the same clothes your father is currently wearing. Basically having two outfits which were worn by your family at two different stages of life, one for childhood and one for adulthood, on and on all the way down through history. What are you, Amish? You can’t be, you have a photo album. Check and mate! Clearly there’s time travel involved and you’re your own grandfather.

That’s precisely what happened to Robin over the course of two issues in the 1950s – which is to say, he discovered a lot of hand-me-down fighting togs in the family attic, not that he was his own grandfather (although let’s check with Grant Morrison to make sure that wasn’t in the outline).

In Detective Comics No.226, it’s revealed that Bruce Wayne spent some time parading around in a Robin costume hoping to get an older man to notice him. Using the garish red-and-green ensemble to hide his identity, young Bruce Wayne plies the world’s greatest detective Harvey Harris for tips on how to become a detective himself. While dodging Harris’ attempts to uncover his dual identity, the adolescent Bruce Wayne adopts the moniker “Robin” (on Harris’ suggestion), which means that Robin had no say whatsoever in anything to do with the adoption of his costumed identity – he didn’t pick the colors, he didn’t base the costume on his circus togs, he didn’t even get to choose the name (It is pretty amusing that pre-teen Brue Wayne was running around in a tunic with an “R” on it but didn’t particularly have an idea what it might stand for. Maybe he was a junior Republican senator, or maybe it stood for “hope”).

Not that Batman had a lot of say in his costumed identity, although I’m sure it helped when years after his preteen career a bat came smashing through his window, giving him an opportunity to realize that bats are awesomer than Robins and only a dumb idiot would dress up as a fat bird to fight crime. “Criminals are a really judgmental lot and they will give a dude tons of shit for dressing like a canary or whatever the fuck” he says as his butler cleans up dead bat parts and broken glass.

No, it turns out that Batman’s dad once dressed as a bat as part of a themed masquerade ball celebrating “flying things”, which is what the idle rich do with their free time I guess. I don’t know what I expected, they’d be shooting rats at the dump with a .44? Of COURSE they have “flying things balls” - check your biology textbooks for clarification.

Not only did Bruce’s pe-paw dress as a grey-and-blue Bat years before the internet had feels about it, he also beat up a criminal. Dumb move, dad-bat, that crook was Lew Moxon who in turn hired Joe Chill who murdered Thomas and Martha Wayne and whooaaaaaa hold on a second, Batman’s origin just became a little bit messier. It wasn’t random crime? I guess it does give Batman a chance to scare a second crook into an untimely death (That’s TWO! Not counting all the hobos he terrorizes at dive bars down at the wharf) but it puts a weird spin on the “war on crime” element when it turns out there was a coherent chain of cause and effect at play.

Anyway, to my dismay neither issue ends with discovering that, in the future, Robin will dress like Batman and Batman will dress like Alfred and Alfred will dress like Aunt Harriet, meanwhile Joker has to dress like The Penguin and Two-Face dresses like Catwoman and Batgirl goes around dressed like Harvey Bullock. He’s the richest man in Gotham City but everybody has to wear their older brothers’ hand-me-downs. So everybody dress up like someone else, it’s a fancy Bat-dress party!

I thought all that stuff sounded familiar. Back in the early/mid eighties I had one of those black and white paperback comics (drawn by John Byrne I believe) that was hanging a "the origins of all Batman's shit" story on some larger narrative that I can't remember.

Yeah, that's "The Untold Legend of Batman" which is one of those continuity-obsessive operations intended to fit everything into the same swimming pool. I'm considering tackling it for the last BLAIL of the year...

In Detective Comics No.226, it’s revealed that Bruce Wayne spent some time parading around in a Robin costume hoping to get an older man to notice him.

...Don'tcha love that first cover, though, and how it portrays Robin's elaborate laced-up-vest-belt-swimshorts combo as some weird onesie, probably with a zipper down the back?