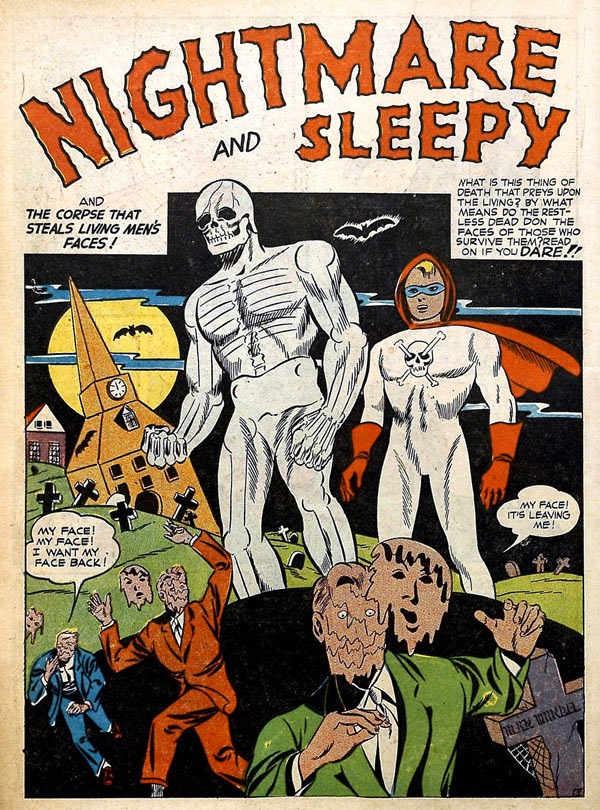 You can hardly throw a rock at a superhero comic of the Golden Age without hitting a dilettante millionaire whose boredom leads him to fight crime, but rarer by far is the homeless, hobo superhero. You don’t get a lot of crimeighters who rely on a utility bindle, or who stop while pursuing the bad guys so as to fish a cigar butt out of a rain grate.

Such a pair of do-gooder drifters, however, are Bob White - professional journeyman wrestler - and his teenage manager Terry Wake. When not grappling for the amusement of carnival crowds and assorted big city rubes in the squared circle, Bob and Terry are hitting the rails in search of their next big match. However, when in their meanderings they happen to come across crooks, criminals and weird happenstance, off come their togs and on go the uniforms of Nightmare and Sleepy, nocturnal terrors of the underworld!

Unlike most superheroes, Bob and Terry stumble into their costumed careers – while running away from danger. When the citizens of the town of tomorrow, Perfect City, are held for ransom by the checkers-playing, checkers-wearing, criminal archfiend The Checker (Off the top of my head, I can’t quite place his gimmick), Bob and Terry (who are only in town for a wrestling match) take off running for safety.

In fact, the duo split so suddenly that they must leave behind their street clothes, and catch a train while wearing only the macabre costumes they’d originally intended to wear to a celebratory masquerade following the wrestling match. They have those, right? A “Winner’s Ball” is what Terry calls it. It sounds like someone mashed up Smackdown and Eyes Wide Shut, to be frank about it.

Bob’s original costume was a macabre skeleton suit dabbed with phosphorescent paint which made the burly wrassler glow ominously in the dark, while Terry wore what appeared to be footie pajamas and a red hoodie. It’s worth mentioning here that Bob’s in-ring choice of wardrobe was a tuxedo – or so we’re told, it never actually pops up in the comic except to be mentioned – which is insane because the skeleton costume is already ten times better than that, though not better than TUXEDO SKELETON (I got a million good ideas, call me, Vince).

Although the pair had nothing going for them but four fists and a tireless appetite for slugging crooks, their enemies had a distinct supernatural feel (in sort of a Scooby Doo way, to be fair); The Checker was capable of making buildings vanish, there was a mirror-faced madman who portrayed a living corpse which stole men’s faces, and a confusing character called The Robber Baron who had died 300 years ago but was clearly a medieval figure. I’m no student of history, but I am a Young Earth Creationist, and 300 years ago was when dinosaurs happened! You can’t pull the wool over my eyes! (PS Wake up sheeple)

Nightmare ditched the skeleton costume to take on a standard spandex superhero suit, complete with a big “N” on the chest, possibly to clarify which bat-eared superhero was currently beating up the crooks – lacking a cape, his costume was otherwise Batmanesque.

Even more unusually, though, the final appearance of Nightmare was not only sans Sleepy, it was in the company of a character named “Nosey McGuiness”, a cheapskate would-be private eye whose homemade cigars summoned a genie-like Nightmare to appear. Now endowed with magic powers, Nightmare poofed out of existence when Nosey’s cigars were extinguished, the whole batch of which must’ve been stamped out because neither Nightmare not Sleepy – whatever verison - ern’t been seen since… 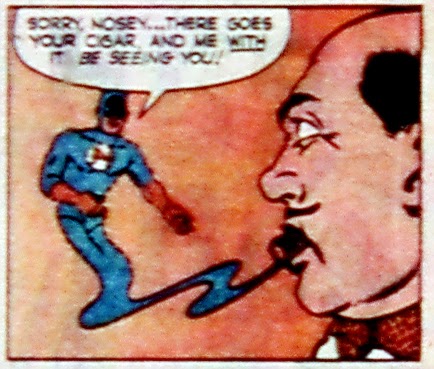 "The Corpse that Steels Living Men's Faces - The Best a Man Can Get!"

Tuxedo Skeleton gets my vote, too.

I wonder what was in those cigars...?

Most recent appearance in 2010 in the pages of Hack/Slash along with Phantomah and a couple other superheroes that are obscure "Gone and Forgotten" types.