With superhero television programs blowing up in the last few years, recaps of superhero television shows have become all the internet rage. Other sites, however, are hobbled by the need to cover shows which have been "recently broadcast" or which are "any good at all." But who covers the uncoverable? That's why Gone&Forgotten chooses to cover the 1991-1993 USA Network live-action Swamp Thing television series in a feature I like to call "Tell Me Swamp Thing Good" or...

The saga of a desiccated spring onion with a bad case of the NIMBYs ... 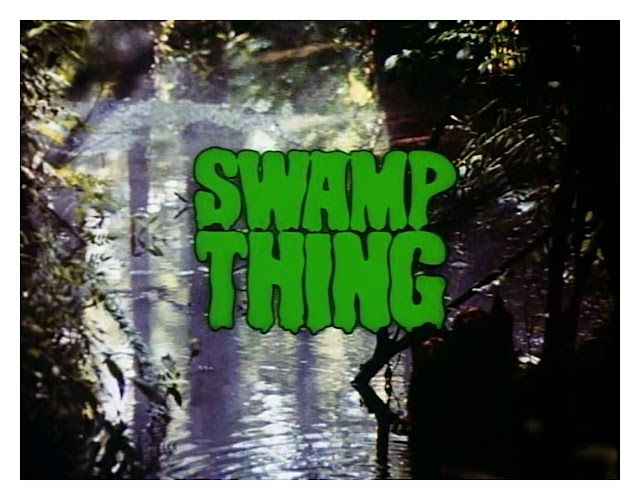 The introductory segment sees Swamp Thing wandering into a small clearing laden with garbage and junk so artfully arranged in the scene that he appears to be approaching the advice-spewing trash heap from Fraggle Rock. What happens instead is that Swampy's magic swamp powers alert him to the presence of a briefcase fill of fat wads of dosh casually hidden in the corner of what I imagine is some swamp billy's private toilet. Now that Swamp Thing's rich, will he leave his home in the bogs on the Universal Studios backlot? He basically won the lottery, you'd think he'd at least cut back on the hours he spends eschewing evil.

After the intro, we join Jim as he's approached by a sweaty drifter (Kevin Corrigan) caught in the grips of some serious gastro-trubs and sucking swampwater from the garden hose under the front porch of Jim's dead grandma's house. The drifter, Buckholt, weaves a compelling tale of being Jim's long-lost uncle, which is believable owing entirely to his palpable air of quotidian menace and the contortions of his bloated face, wrenched by gas pains. In a twist unique to the Swamp Thing television show, but powerfully at home on the USA Network, this scene ends with Jim bringing the drifter/uncle up to the bathroom for a therapeutic shit.


Meanwhile, evil real estate agent Eleanor (Cynthia Davis) harasses slow-witted boat-jockey Obo (Anthony Galde), because it's the best he deserves. She's on the trail of that aluminum valise full of sweet greens, with which "Uncle Bucky" (oh how the menace of the man increases with that name) has absconded. Little does she know that he hucked the cabbage into an open-air bathroom while he himself slowly dies on the floor of the Kipp's upstairs commode. Well, storytelling is the art of symmetry, in so many ways.

Jim employs Swamp Thing's help in curing his uncle of the "severe heart disease" which is slowly reducing him to a corpse under the toilet, and which he manifests by clutching his stomach. Bringing the protector of the green into the house has some downsides - it's important that we remember that being out of the swamp reduces Swamp Thing's power and weakens him to the point of near-death. It's important that we remember this because the writers will not and it'll stop being an issue in a few episodes.

Jim's mom Tressa returns home to find Uncle Bucky kipping under the crapper. Or is he? An uncle, that is, not sleeping under the shitter, which he is definitely doing. Tressa explains that she's an only child, and when Jim reminds her that she once told Anton Arcane that she had a brother, she replies "I only said that to be hostile!" Oh, Tressa, that explains so much about you and your son's strained relationship.

Bucky's not the only massive fibber in the criminal gang. As the ambulance hauls the artificial uncle (he's the former housekeeper's kid, it turns out) away, evil but dressed-for-success Eleanor pretends to be an investigative reporter and interviews Jim, sans cameras or a microphone.

If there's any insight into Jim's character, it comes pretty starkly when Eleanor blandly asks him 'How does it feel, someone your age, hearing a man's last words" and Jim replies "It doesn't feel like anything." No, death never feels real to Jim ... when he isn't pulling the trigger himself.


At the midway point, Swamp Thing is dying in the attack and Eleanor is harassing a shirtless Jim in his own bedroom in the middle of the night. This sounds a little like a sex dream you'd be scared to even tell your therapist, and it doesn't get any better when Tressa comes tromping in and gets plugged in the boob (keeping with the conflating-the-heart-with-the-stomach theme of this episode, she clutches her gut a solid four or five inches below the squib. Maybe it ricocheted off a rib).

Swamp Thing heals Tressa's wound, puts the shocked mom to bed and somehow cleans the blood off her peejays. God, I hope he and Jim didn't change and bathe her. Shit gets weird in the Kipp house as it is, I can only pray it doesn't go beyond this.

Meanwhile, Jim spilled the beans as to the hidden location of the cash, so Eleanor dashes off to the swamp in her 90s powersuit. Some sort of Arcanian pigboy is digging around the open-air shit-and-pissery, and Eleanor scares it off with her gun --- which she promptly drops when she sees the briefcase peeking out from underneath a sink. This is a bad exchange, because Swamp Thing has filled the briefcase with roach-infested filth -- he's funny like that, our Swamp Thing! Great sense of humor!

While Eleanor scurries away from it, the pigboy takes a potshot at her with her own discarded gun (and then runs off, with the gun in hand/hoof. It SHOULD, by all rights, turn up as a story point sometime down the road, by the rule of Chekov's Gun In The Hands/Hoofs of a Pig Monster, but it doesn't really bear any fruit). Clutching her stomach -- it's catching! -- Eleanor kicks it just before the credits with this potent observation: "What a lovely place to die!" Enh, it has its charms.