A fine reward for spending an afternoon elbow-deep in dusty quarter-bins is to discover the 2004 Rob Liefeld Sketchbook (volume 1!!), published by Arcade Comics because I guess Rob's multitude of independent presses have all disappeared into the ether.

Rob Liefeld is an understandably polarizing figure in modern comics, although he's certainly not a fraction of the divisive character he was back in his early days. We seem, as a community, to have come to some sort of peace regarding the peculiarities of his illustrative style, and we've apparently chosen to put to rest any of the creator conflicts attached to his name. What remains is a zen-like acceptance of Liefeld as a force of nature more than an individual professional. Does he give DC the business and give enthusiastic thumbs-up to projects like Prophet? He sure does! Does he think Fabian Nicieza ought to eat dirt? Oh gosh yeah I guess so. Like Walt Whitman, he contains multitudes.

In any case, the Sketchbook is an interesting snapshot of Liefeld being Liefeld, for all that entails. Sketches of figures tend to be in the same two or three poses from the same camera angles, lots of talk about which properties are currently bouncing around Hollywood, all the stuff you've come to know and love.


Getting a peek into Liefeld's creative process is relatively as unenlightening as you'd expect it to be. He's certainly been, over the course of something like a thirty-year career, a creator with a seeming disinterest in subtext and symbolism. Semiotics, if they exist at all in his work, are purely instinctive. What do the colors of this character's uniform say?  How does the beetle-like silhouette inform the identity? What do we know of his environment from the heavy gear, impeccably preserved -- the pristine gloves, the banded metal legs (or are they fine, wrapped strips of fabric, unstained and whole?). Y'know what? These are not questions Liefeld has ever asked nor has the audience ever been asked to question.
Included in the center spread of the book are a few color sketches for Rob's long-proposed supernatural/sci-fi retelling of the Bible. This is a project that's been promised since the Nineties, at least, under the accolade "Spiritual warfare at its finest" -- a phrase that is all but burned into my memory as being one of the few things I never was aware was subject to the vagaries of vintage. Spiritual warfare, at its least fine? At its most mediocre? On what chart do we gauge spiritual warfare? And in what size decanters is it made available to us?


Does spiritual warfare at its finest sound good to you? Well, here's the pitch! 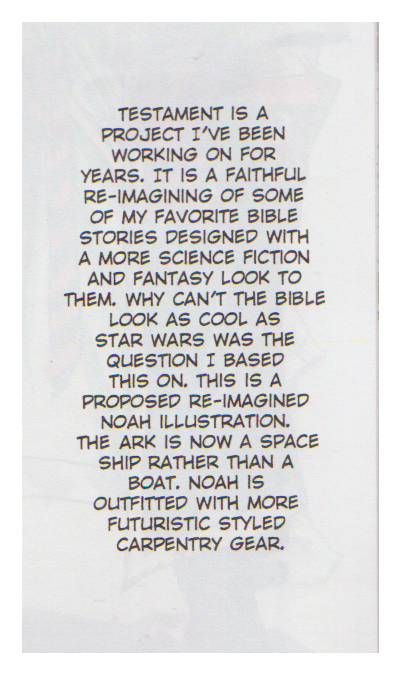 A faithful adaptation but full of spaceships.

One of the high points of any Liefeld conversation is how often he makes reference to which of his projects are currently being batted around Hollywood and which major celebrities are attached to it. Dooms IV, as far as I'm aware, is this close to making it to the silver screen. In this book, he's revealing a handful of his pitches - a Catholic schoolgirl who's secretly an intergalactic princess and who wears armor with nipples on it basically, another iteration of The Mark (this is recent enough that he namedrops Will Smith, instead of namedropping Tom Cruise which he used to do), and then this film in which a woman runs around with a tiny version of Judge Holden from Cormac McCarthy's Blood Meridian stuffed in her knapsack.


I should probably scan the whole thing, for posterity's sake. Future generations should not be denied this.
at 9:00 AM

Y'know, if Liefield ever went back to school like Steve Rude to learn the actual craft of drawing, he might actually become good or at least a better draftsman. Underneath all of his artistic crutches, his artwork still has a lot of zip and energy.

Also, is it me or is that second sentence in the TRUE DANGER pitch grammatically screwy? No editor per the usual, amirite?

How is it that Rob Liefeld the only person to think of "Lone Wolf and Cub, but with a hot lady with guns?"

I feel like this is a pretty good opportunity to mention Steve LeCouillard's lovely Una The Blade, which completed a Kickstarter last yearL Una the Blade

Sooo--That baby is just a head and a torso? Or is it a parasitic twin growing out of her back? Because I don't see where its legs could possibly be in that knapsack.

No way is that female w/baby on the right a Rob Liefield drawing... it shows feet, but seriously, the anatomy is way too realistic!