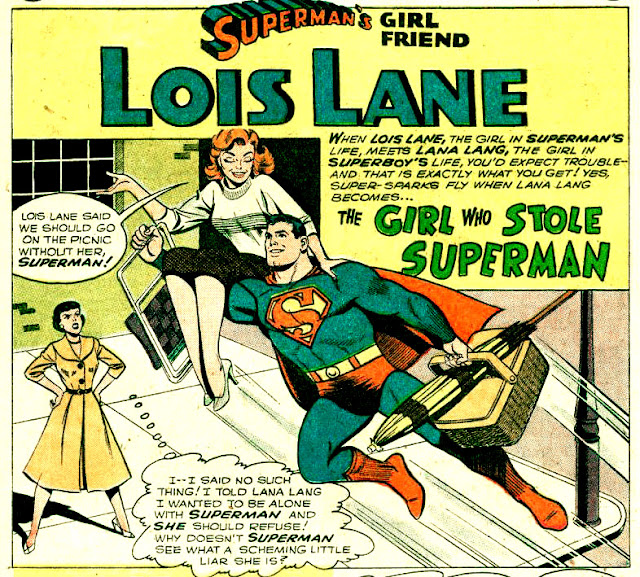 The acrimony between Lois Lane and Lana Lang begins in earnest* in the pages of Superman's Girlfriend Lois Lane vol.1 No.7 (February 1959). That's pretty early into the career of Lois as a solo performer, but Lana knows very well that you gotta get your claws in right away, or you give your opponent an advantage. I don't know for sure that Lana thinks that, but she seems to have that killer instinct. She's going to eventually kill Lois, is what I mean.

*They met each other a few times as teenagers, but I don't find it as fun to watch two teenagers try to murder each other. Two women in their late twenties, however, I'm all about that, evidently.


Lana re-enters the world of Superman broke, homeless and starving. That's a bit of unexpected gravitas to a Silver Age Superman story, unless it was caused by Mxyzptlk. It was not. Lois finds Lana in line at a soup kitchen and takes her back to her lavishly appointed apartment, possibly to rub it in. You also have to wonder where Lana's wealthy archaeologist parents are or, for that matter, where her famous archaeologist mother wandered off to. We never see her anymore, not since the old Superboy story where they mentioned she was an archaeologist too. They just always show the paternal Dr.Lang. Oh my gosh, did Mr.Lang kill Mrs.Lang on some expedition to a forgotten temple in the deepest jungle? Does the corpse of Lana Lang's mother rot on a forgotten stone dais, blackened by centuries of sacrificial blood? Was it an ironic death? Good lord, have I stumbled across a terrible stain on the legacy of the Superman Family? Also, what was I talking about? I've gone off on a tangent. Hi, let me tell you about Lois Lane and Lana Lang hating each other...

Lois' act of kindness bears fruits of friendship, which sounds gross upon reflection. Lana not only cleans up well, but her gratitude is tremendous. Despite Lois' protestations, Lana genuinely wants to give Lois one of her greatest mementos -- a ring which Superboy gave her because he almost killed her once.

(Aside: So, the origin of that shitty ring is that, on a Fourth of July celebration, Superboy dressed as a redcoat and let the gun-happy yokels of Smallville take potshots at him while unprotected teenage girls watched. A ricocheting bullet chipped a piece of stone which flew up and injured Lana's finger and, to make up for it, Superboy made a ring and placed it ON THE FRESH WOUND. You know Lana's got it bad because she just soldiered through it. Apparently you gotta get used to the occasional flesh wound if you're gonna be sweet on Superboy)

Shitty ring or no, Lois' competitive spirit encourages her to ask Superman for a ring of her own, which he provides her out of alien space metal, the safest known metal for rings and which are proven to never have any sort of negative effects on the people who are wearing it.

It's not Lois who ends up acting like a nutcase, though -- it's Lana. Despite her gratitude to the woman who saved her from dying on the streets, she suddenly starts sabotaging Lois! I would too -- Superman's a catch!

The ways in which Lana stacks the deck against Lois is multitude, and every one of them is absurdly complicated. She ruins a Superman-themed dinner party by brushing thin layers of paint on the glasses of red, yellow and blue-dyed lemonade -- the lemonade that recalls Superman's costume, a definite selling point! -- on which Superman's fingerprints are captured. He blames this trick on Lois, for good reason, if you think about it.

Lana swipes an opportunity to stand under a shower of volcanic ash alongside Superman, satisfying some local custom that two people covered in the toxic filth of a volcano will one day be married. Lois seems to have dodged a bullet there. Also, Lana swipes a Kryptonian dress which Lois had been working hard to put together for a costume contest which Superman was judging, and for which the prize was a date with Superman. People die in tsunamis every day, but Superman's dating beauty pageant winners. It's a good life.

Ultimately it turns out that the space metal ring -- surprise! -- is dangerous and will blow up if Superman uses his X-Ray vision near it. All of Lana's fressing and frigging with Superman was all an act to get Lois to remove the ring! And it worked! So would have "asking her," but Superman confides in Lana that, well ...

"I've just discovered that the rare metal in that ring endangers Lois' life! It I tell her the truth and ask for it back, it would be just like her to keep it, thinking I wanted it back because it's a clue to my identity!"


For the record, the worst betrayal of all is saying incredibly shitty things about your girlfriend to her romantic rival. Well, that and fucking her, I guess. I'm just saying, I don't think Superman or Lana get out of this one smelling like roses...