A few more pin-ups from the 1991 Amazing Heroes Pin-Up Special. Despite what was promised/threatened, there's no tits - but come the 1992 Special? Oh, there will be tits. 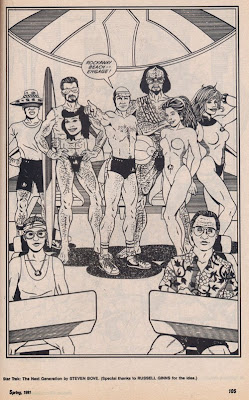 Much in the same vein as never having had the undeniable urge to see the cast of TaleSpin in their beach gear, I likewise never much wanted to see the cast of Star Trek: The Next Generation in theirs. More specifically, I had no inclination towards ever wanting to see the befurred body of Jonathan Frakes in a banana hammock and a Nagel beater. Sleeves all ripped off and everything. Do you have any idea how this image has burned itself into my brain, and how difficult it makes it to watch any television special about UFO abductions or mysterious disappearances that might have to do with teleportation? That's right, I just burned Riker's post-Trek career, and he deserved it if for no other reason than walking around the finale to Enterprise and spoilering us on Trip's death before the commercial break. DAMMIT I AIN'T FORGOT, RIKER, I AIN'T. Now put on some pants. 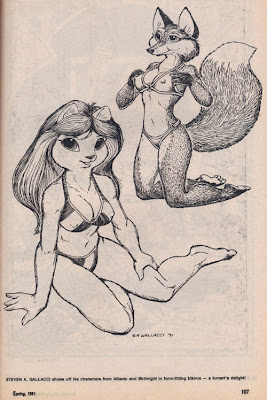 Oh goddamn it, the ladies with the animal heads thing. Far be it for me to suggest that the whole thing about getting turned on by a sexy lady but she has a gopher head is endemic of an aversion to equanimous human social interaction, flat-out full-bore gynophobia and more than that a kind of a sad power and control fantasy, but on the other hand yeah I am suggesting that pretty much. Above and beyond all that, I still don't get the fantasy of making love to a beautiful woman and then she brushes her hair out of her face and she gazes meaningfully into your eyes and she's actually your neighbor's dog, but still, you seen her tits? Patches has some great tits. 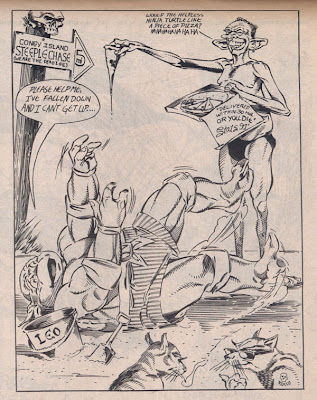 ...And lastly for 1991, a gangbusters gonzo batshit insane TMNT submission. I have NO idea what all these pieces are meant to represent, but now I've seen both William Riker AND H.Ross Perot in banana hammocks, and I'm pretty much done with the beach forever anyway I guess, thanks.
at 2:24 PM

I think Riker wouold count as a particularly disturbing furry as well.

And the people into the animal head girls are called "virgins."

You Have Lost The Game said...

But most clumsily, Marina Sirtis had and still has cracking and LARGE boobs, and Gates McFadden is a dancer with a more athletic physique. To draw swimsuit cheesecake is neither here nor there but to shortchange the subject?