Bear with me until the end of this one…

Back in 1984, Marvel Comics hosted a (nearly) company-wide event under the heading – and, in fact, under the printed warning label – of “Assistant Editors’ Month!” (adding the dire warning “Beware:” and the caveat “Don’t Say We Didn’t Warn You!”.  When every sentence ends with an exclamation mark, you know you’re reading some classic Marvel).

The premise of the branded event – not an “event” in the modern sense of the word, with limitless crossovers or over-arcing storylines or game-changing plot twists, but rather merely a self-aware theme collecting almost every title released that month under a very meta umbrella– was that Marvel’s senior editorial department had abandoned New York’s grey and crowded streets for the sunny climes of San Diego and that city’s annual Comicon (You may be familiar with it in its current engorged and soul-hungry condition. It’s that big event they hold every year in San Diego where they debut a lot of movies and television shows and toys and videogames. And something else, it’s on the tip of my tongue, but I just can’t recall). With all the bigwigs on the left coast, this presumably left the Assistant Editors in charge of all their respective books.

In reality, the assistant editors were as fit a bunch of professionals as Marvel had on the roster, and the books were as well off as they were under the regular editorial direction – the creative teams, after all, were pretty much stable and the story direction had long ago been established. Still, Marvel chose to make a little hay with the idea, and advertised the books as though anything were possible and all hell was breaking loose between the covers.

Some Marvel series went all-out for gags that month, such as the fairly infamous Marvel Team-Up #137, which featured Peter Parker’s Aunt May as the herald of a Twinkie-starved Galactus. Captain America traded half his book to his girlfriend’s daydreams of being Bernie America and battling against the terrible MOSKULL (and making a nod towatds CURLYSKULL and LARRYSKULL and goddamnit comic book nerds and their fucking Three Stooges jokes, it never dies), while The Uncanny X-Men Annual had what passes for a “madcap romp” through the Marvel Universe as the X-Men battled the Impossible Man, and so on.

Other books only indulged themselves with one-page gags, and even others – primarily the licensed properties, like GIJoe – avoided the event altogether (or at least as much as they could), while John Byrne pulled off a relatively highbrow conceptual gag in an issue of Alpha Flight which allowed him to pretty much draw nothing for six pages (Simultaneously getting out of work and creating something which was visually revolutionary, so that’s a win for Mister Blonde-Hispanics-Are-Whores and oughtta be considered in his lifetime tally. Right after the “Blonde Hispanics Are Whores” thing …)

But – and speaking of John Byrne, who wrote this issue and provided the cover illustration – the comic I’m bringing up here is The Thing #7, “Two Fisted Feet!”

The story, by and large, is all but a boilerplate slugfest replete with self-pitying monologues in the mighty Marvel manner – albeit abbreviated, the shortening of which has a lot to do with why I’m bothering to mention this otherwise unremarkable issue. Still, we’re here, so let’s take a momentary detour into the most important element of a comic excepting the cover, the lead character, the guest stars, the creative teams and the price point – the content.

The story begins with Ben Grimm – aka The Thing, of course, a name which I recently realized is amusingly translated as La Cosa in Italian reprints of Marvel Comics, and I keep wondering if there’s a story out there called “This Thing of Ours”, BUT I’M DIGRESSING – visiting his blind sculptor girlfriend Alicia Masters in the hospital. She’s been admitted because of chronic bowel irritation and a spastic full-facial mucus discharge (which is not true, but I didn’t pick up her ailment from the comic itself and hell if I’m reading the preceding issue. The Thing as a series doesn’t exist for me until Rocky Grimm, Space Ranger).

Touched by his girlfriend’s vulnerable plight and besieged by morbid thoughts of his own mortality, considering his line of work, Ben wanders the streets musing – until he stumbles across a bank robbery being committed by a muffin-headed Swedish villain in size forty clodhoppers and a pair of orange overalls so butt-hugging that they’d embarrass Tom of Finland.

This hell-raising Hummel figurine is Goody Two-Shoes, a stomp-happy Swedish supervillain who uses the pummeling power of his atomic shoes in order to ban make a name for hisself, hokay and also to talk like that incessantly and make me want to murder actual letters on a page. I’m serious, the joke wore thin immediately, so thin that I grew angry at actual printed words. I followed the word “Yoost” home after the comic was done and sat in my car across the street from its house, turning a kitchen knife over and over in my hands until the lights went off in its bedroom. I’d have made my move, but the paperboy came by just then and I think he got a good look at my face. Next time, “Yoost”, next time.

The fight grows increasingly melodramatic as it takes Ben and his dopey blonde adversary up the Empire State Building and back down to the street level, where The Thing barely manages to pull out a victory by pummeling his enemy insensate and crawling near-dead from the subsequent wreckage, bearing the malevolent Mary Janes in his mammoth mitts and crowing his victory to the heavens.

It’s about there that you figure out that the gag of the issue is that they were writing the dumbest-ever villain as the most dramatic battle of the Thing’s career, but – bless them – it wasn’t. After Ben’s victory, the comic switches over to full John Byrne mode for a backup showing the behind-the-scenes reality of the situation; Ben’s reading the very story we too just read, aghast that such a simp as Goody Two-shoes was portrayed as anything even remotely resembling a threat (the real fight, we learn, took less than a minute with Ben as the decisive victor).

In the spirit of the classic Stan-and-Jack appearances in the old FF comics, Ben flies downtown to the Marvel offices where he confronts Byrne, assistant (and this issue’s full-fledged) editor Ann “Dondi Eyes” Nocenti, and artist Ron Wilson (as an aside, when I first read this issue I thought “Ron” was referring to Ron Frenz rather than Ron Wilson and had this strange moment where I was under the impression that Ron Frenz was a thickly-built, muscular black man).

ANYWAY ANYWAY ANYWAY, we’re getting to the point I was writing this whole thing to get to, and it’s a matter of unfortunate juxtaposition...

Furious, Grimm bursts into the palatial offices of John Byrne – surprisingly but pleasingly taking a few potshots at his own reputation for egomania – howling for blood and demanding an explanation of why an insignificant imbroglio was exaggerrated into a notorious knockdown and devastating drag-out. Nocenti and Wilson explain some of the premises of of basic superheroic storytelling and why “telling it like it is” doesn’t work when the hero weighs in at a half-ton and the villain would fall down when faced with a half-hearted fart (Mind you, all-around Olympic-level athlete and martial artist Batman has made a seventy-plus year career out of pounding the sand out of a whole passel of slim women, manic anorexics and a fat myopic dwarf in a tuxedo, so maybe this advice sucks).

Byrne’s notorious bluntness takes the fore, resulting in setting off an offended Grimm… 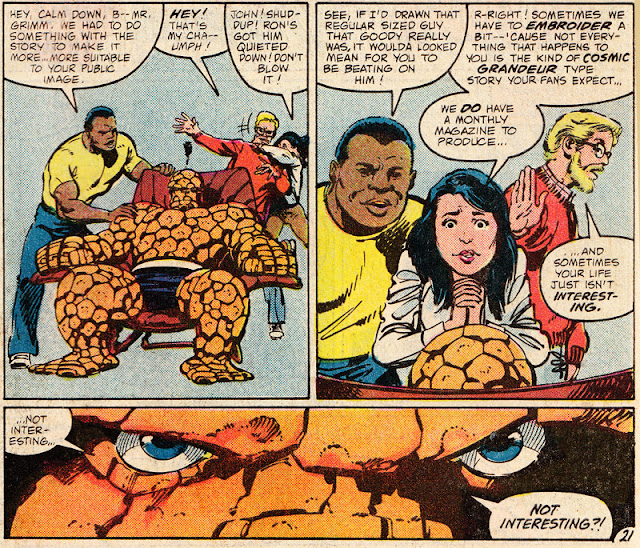 Locking himself in Byrne’s office, the sound effects imply that The Thing is battering the holy hell out of the creative team of his own book, meaning that next month’s issue will probably be an inventory filler which is great news if it's by Gerry Conway and  Ross Andru but kind of a burn if it's by Bob Layton and Sal Buscema instead. 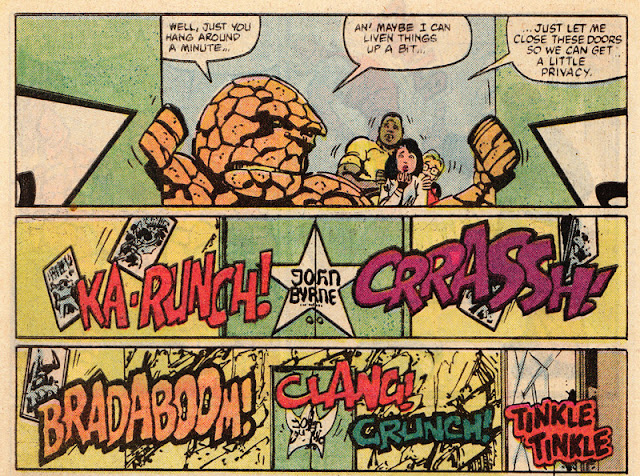 So, here we go: Leaving the offices, Grimm meets writer Roger Stern in the hallway, and has this exchange: 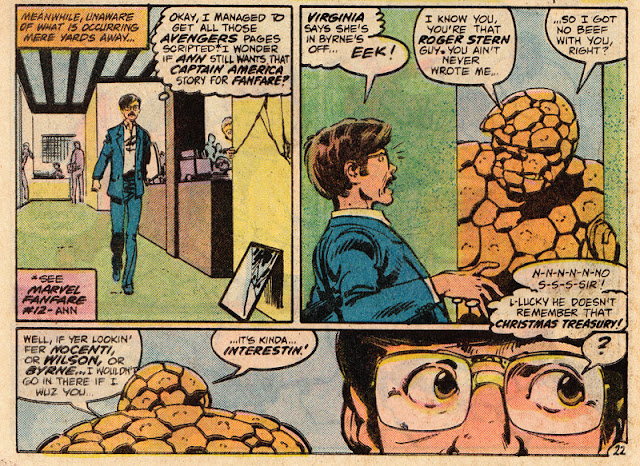 Neverminding that - minus a "The End" formally concluding this story - if you follow Stern’s eyes to the facing page on the right, here’s what he appears to be looking at in the wake on Ben Grimm's fury: 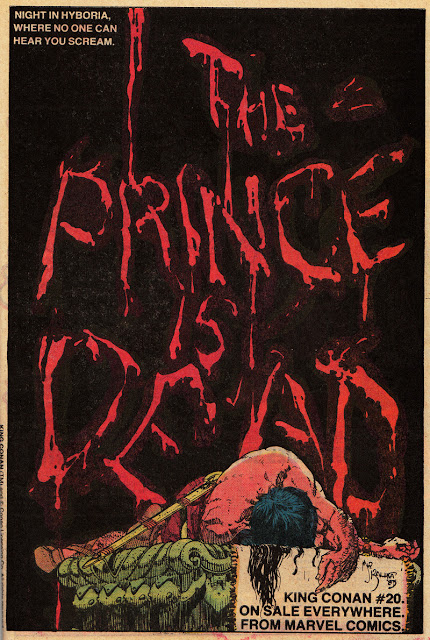 RIGHT! We’ve got Byrne writing one of those stories of his where all the events in this made-up universe turned out to never have happened anyway, so it’s double-made up and we’re all schmucks for reading it in the first place (We’ll discuss Generations III some other time) and also it appears that Ben Grimm has murdered three people and painted the walls of the Marvel offices with their blood under some sort of sinsiter Mansonian shibboleth.

I remember when that ish came out. I was working at Alley Cat Comics on Cape Cod at the time. Thing was a troubled titled. Ed Ass month was weird.

"John Byrne pulled off a relatively highbrow conceptual gag in an issue of Alpha Flight which allowed him to pretty much draw nothing for six pages (Simultaneously getting out of work and creating something which was visually revolutionary..."

Oh, God, I remember "Snowblind." I can never figure out why people think it was revolutionary or groundbreaking, rather than just another egomaniac waving his wee willy winkle in fans' faces. (I know a lot of frustrated artists in the industry hate the fanboys and would love to fill a million real-life refrigerators, safe in the knowledge that the survivors would still pick up the worthless 43rd issue of Abs-Man & Boobs Girl, but damn.)

But Byrne did pull off one thing that was really revolutionary in Alpha Flight three issues later (before losing interest and letting the book descend into windowpane panel layouts, scrambled-egg monsters, and exposition exposition exposition); he proved editor-in-chief Jim Shooter wasn't actually reading the books, by very subtly outing Northstar in the first half of the "Deadly Earnest" two-parter, long before Northstar officially came out with the usual hamfisted comicbook dialog. (Shooter was adamantly opposed to a superhero being portrayed as "that way," even an irritating suspected terrorist like Northstar.)

Billy: I have to give Byrne some credit where credit is due, and say that Snowblind (and it's thematic predecessor "Yesterday Man") was visually game-changing - at that point in American comics, fifteen years or so prior to Sin City, no one was doing anything like that. For what it was worth, it was a helluva study in storytelling by way of stark values.