I've never been able to precisely put my finger on the reason, but this is a fact: Above and beyond all other comic companies, I hate Solson Publications.


Your Humble Editor's relationship with many of the comics covered on this blog is complex and may contain multitudes of contradictions. There's the feeling to be had, as a for instance, about companies like Continuity and Atlas/Seaboard, where the potential was great but the execution was club-footed. Likewise, there are series like Secret Wars II and Kitty Pryde and Wolverine where a simple premise was overwhelmed by escalating pretensions, or you've got stories like "Krypto-Mouse" which are so enthusiastically stupid that they grab the reader's sense of distaste and aggressively flip them over to pure love. Solson is none of these.

My feelings towards Solson don't even mirror my distaste towards the execution-style editing oversight of Dan Didio or the institutionalized misogyny, passive racism and hypocritical class boosterism of comics in general; Solson doesn't register that level of offensiveness, even in a book legitimately titled "How to Draw Sexy Women" - far from it, in fact. Solson is just so godawfully mediocre.

The backstory of Solson is brief: Founded by Gary Brodsky, son of Marvel exec and onetime Fantastic Four member Sol Brodsky (thus "Sol's Son" comics), artistic elements largely (man)handled by Rich Buckler, the most dynamic artist in comics assuming all the other artists are taking the day off.

I shouldn't take potshots at Buckler, who is a longtime comics vet on a bazillion titles, but who is unfortunately also possibly one of the most boring artists in ZZZZZZZZ. Sorry about that. I was finishing that sentence and found myself thinking about Buckler's art, and it put me to sleZZZZZZZZZZZ.

Therein lies the real problem with Solson: Buckler had dozens of titles under his belt, Brodsky was the son of a founding Marvel artist and production manager - Brodsky's dad was Stan Lee's right-hand man and Buckler's collaborations were with some of Marvel's most daring writers, and yet the whole endeavor was a mish-mosh of dull. The Solson properties fell into three camps:

If Reagan's Raiders wasn't off-putting enough, then prepare to be sufficiently put off by Solson's How To Draw Comics Comic series. The title is drawn from the fact that it is, you see, a comic about how to draw comics, except a book isn't a comic book just because it's comic-sized and printed on comic paper. If I printed a comic book and inside it was wallpaper samples and a shopping list ("Pick up more wallpaper samples"), then it isn't a comic book. A comic book has conventions of storytelling which make it a comic book. The Solson How To Draw series were illustrated instructional pamphlets, and also they were lousy at it.

I only ever found the first and third issues of the series, so I can only speak to those installments, but I can at the very least attest to a pretty significant drop in quality between the unbelievably shitty third issue and the first, which was merely a rotten-as-hell ripoff.

To its credit, the first volume boasted some legitimate bad girl comics cred by way of including artists Buzz and Louis Small Jr, both of whom had acquired some fame for their contributions to Harris Comics' Vampirella at the time and also neither of whom you've thought about since 1992 until I mentioned them. You're welcome.

Likewise, the first issue had the elder John Romita providing several pages of basic but essential information regarding anatomical structure. Keep in mind that it wasn't explicitly information on how to draw sexy women, and it was certainly in there in order to justify the book's labeling as an art instructional, but ... wait, I'm not sure what my point was. Keep that in mind, though.

By and large, the remainder of the book was shy on actual instruction, and it became pretty clear pretty quickly that this was a cynical attempt to throw together a pinup book and fill spare pages with assorted sketchbook doodles (each issue also included blank pages in the front and back, I guess so aspiring artists could practice their pen techniques or chronic masturbators could tear something out of the book to clean up the mess, one'a the two).

Come to the third issue, the gig is up, and all the production values - inside and outside of the book - fall apart. Far from the color cover of the first issue, the third ish is two-color on white and even uses freakin' Hobo as one of the fonts. I mean, I love Morris Fuller Benton and the American Type Foundry and all, but ... Hobo?* (Those last two sentences may be invisible to people who are not typography nerds)

The only possible high point is, at this point, the obvious desperation in the captioning, insisting that these hasty sketches of ladies with one boob showing is the ultimate in sexuality. "This is raw sexuality jumping off the page" insists the caption accompanying an illustration which resembles as topographic map of Arkansas in thigh high boots. "Sexy shoes add the touch sometimes!" Sometimes. "Fishnet stockings always accentuate sexuality!" Not if you're a fish.

In the end, what makes How To Draw Sexy Women The Comic so awful is just that it's such a blatantly cynical attempt to cash in on what was already the most cynically marketed period in comics history. Before this book, you could almost believe that Solson was merely a collection of unremarkable, unimaginative comic fans running a vanity press simply because they wanted to produce comics, no matter how ineptly and pointlessly. After this book, it couldn't be clearer that they were in it for the cash, but couldn't even bother their asses to put some real effort into it. In the end, that's the real crime - it's one thing to crash and burn, it's another thing to deserve to crash and burn, but it's altogether wrong to deserve to crash and burn and to do it small.

And now: Your How To Draw Sexy Women (The Comic) instructional art gallery! Tell me if you figure out which of these ladies is Gary and which is Al.

(Behind the cut for possible NSFW-ness) 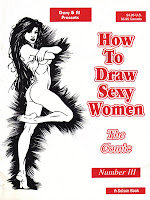 Solson is pure cheese. They're a parasitic organization, like "mockbusters" or "mockumentaries." They couldn't exist without other companies keeping the industry alive.


That said, I 100% disagree with your assessment of Rich Buckler's work. No, his work at Solson isn't great. But he was a headliner at Marvel in the 1970s and one of their more successful cover artists. He was also a creator and artist of the acclaimed All-Star Squadron--my favorite superhero book of that era.

I bring this up because I almost stopped reading this article because of your unnecessary (and what I see as unjustified) rip on Buckler. You didn't need to go there to make your point about Solson.


But not all Solson was bad. If memory serves, it was Solson who published John Byrne's How to Draw Comics and that was a VERY good tutorial for what Byrne was covering.

And also, Solson published probably the best tutorial on storytelling outside of Stan Lee's How To Draw Comics the Marvel Way. This two part series was written and illustrated by... Rich Buckler (Rich Buckler's Secrets of Drawing Comics or somesuch).

I bought everything in the 1980s that even brushed on the subject of creating comic books. The three aforementioned treatises, two by Solson, were among the best I found. (The rest were broader, about cartooning in general.)

Solson was only mostly dreck. It wasn't entirely dreck.

Sorry; but, the best tutorial on storytelling is Will Eisner's Comics & Sequential art.