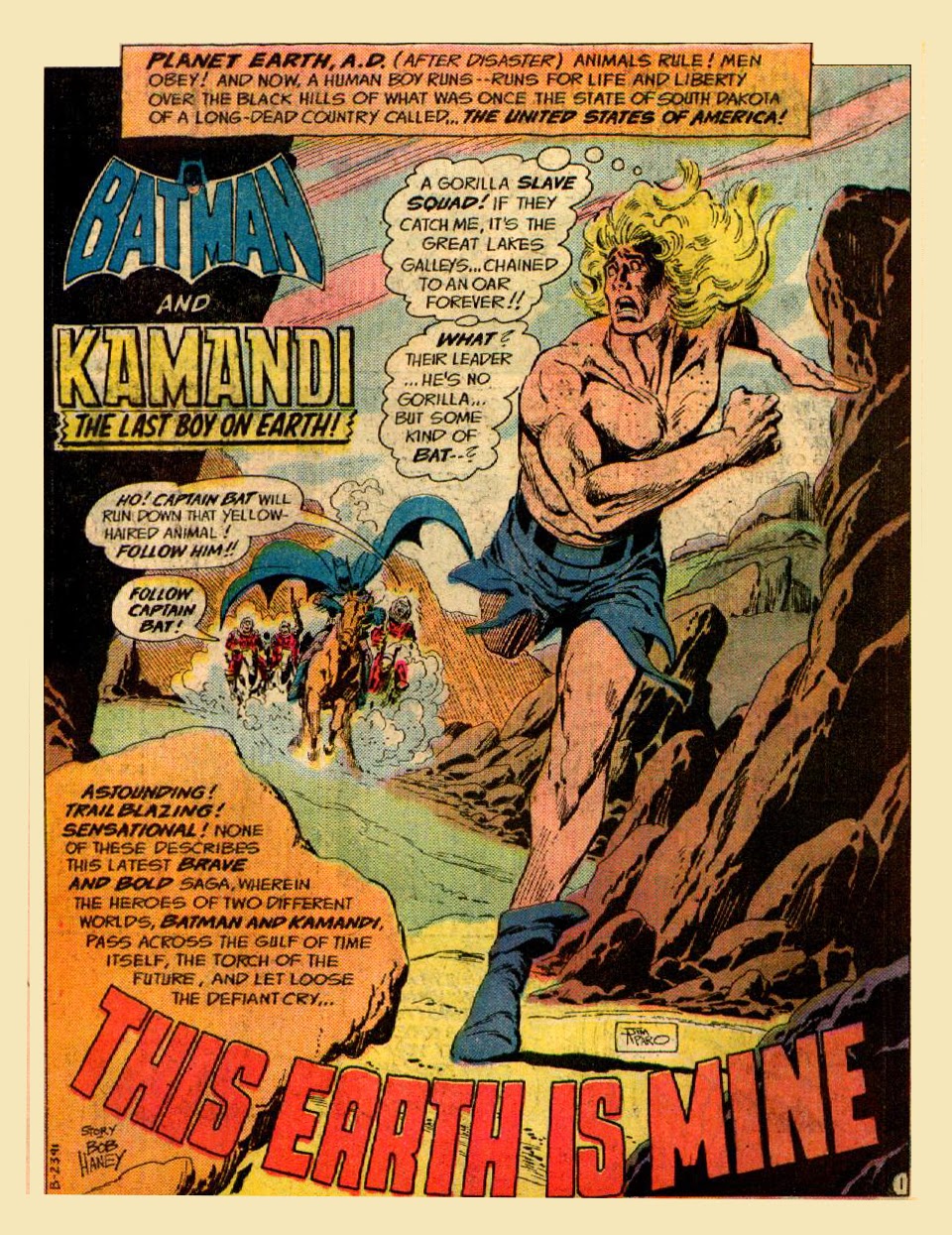 The Bob Haney-scripted issues of Brave and the Bold have been enjoying something of a critical renaissance lately, having been rediscovered for the bizarre but highly palatable, narratively layered and simultaneously absurd yet heartfelt stories that the man was so skilled at crafting. The worst you can say about Bob Haney is that he unveils the ludicrous with po-faced sincerity, which is a helluva compliment in this medium where the daffiest bullshit usually has to be accompanied by a foil-cover on a twelve-part maxiseries.

So when Batman manages to end up in the post-apocalyptic future because magic-adept colonists hiding out from bear-people inside the hollow heads of Mount Rushmore wished him into a time-travel coma, you take it with a sort of sincere appreciation of an inexpensive yet thoughtful gift given for no particular reason.

Kamandi, of course, was Jack Kirby’s spin on the Planet of the Apes idea, with the last human boy on Earth (more or less) salvaging some kind of meaningful existence from a world where humanoid animals had effectively taken control – barbaric dominance, mind you, but still control – over a hellish, demolished landscape littered with the Ozymandian remnants of a once proud culture. It’s not easy to bring Batman into a world like that, but you could get Batman onto an episode of The Flintstones if there’s ducats to be made from it, believe you me.

When he does appear, there’s some convenient bluffing made of an aggressive ape patrol (“Ape Patrol”, coming this Summer from Fox) and Batman adopting the identity of “Captain Bat”, a mutant bat-person. This is a pretty good trick, since Batman’s costume doesn’t look so much like a bat as it does a glam rocker’s rubber fetish ferret outfit. He looks like if Marc Bolan costumed a production of The Wind In The Willows.

Chasing Kamandi up through the hills through Mount Rushmore, Batman discovers that he’d been summoned across time and space by the wishful thinking of a hidden enclave of beleaguered comic book fans hiding out in Teddy Roosevelt’s sinuses (no kidding, really). Hiding from mutant bears who are also park rangers in the most Hanna-Barbera-esque irony of all time, the hidden human clan uses “magic powder” to bring Batman to their post-apocalyptic key party, and a Seventies’ style cassette tape player to simulate commands issuing from the heads on Mount Rushmore.

You know, on a side note, I recently tried to explain to a Millennial friend of mine how those old cassette tape players worked, and we hit a real sticking point when I described how you had to simultaneously press “record” and “play” in order to start recording. “What happens if you only pressed record?” she asked with increasing terror, “What if there was no tape in it!?” I felt like I was describing how me and the other cave-men first domesticated the wild horses of the plains, or how my post-apocalyptic clan confused the mutant bears.

By the end of the story “Captain Bat” (alternatives: Major Murcielago, First Mate Fledermaus, Parson Pteropodidae) invites Kamandi to come back to present-day, pre-apocalyptic Gotham City with him, which is much better than the blasted landscape with all the mutant animals in it because it’s only a crime-ridden hellhole full of crocodile men and murder clowns where even the former DA puts babies into deathtraps for a living. HOW exactly Batman intended to manage that is up in the air, since he was apparently in a coma the whole time and I guess that would mean if Kamandi were in the present then his body would be in a coma in the future? I dunno, all I know is it sucks they don’t have Elseworlds any more because Kamandi would have been a pretty interesting successor to Dick Grayson’s Robin …

>They are hands-down lucky
they didn't accidentally summon
The Joker...

(almost afraid to post lest I get spanked again)

Least Favorite Haney moment: Black Canary blows a stake-out to catch the sniper who almost iced Batman to stick her wet hair in one of those giant beauty-shop hair dryers...the wet hair that is a blonde wig. Blondes! Amirite, Bobby?