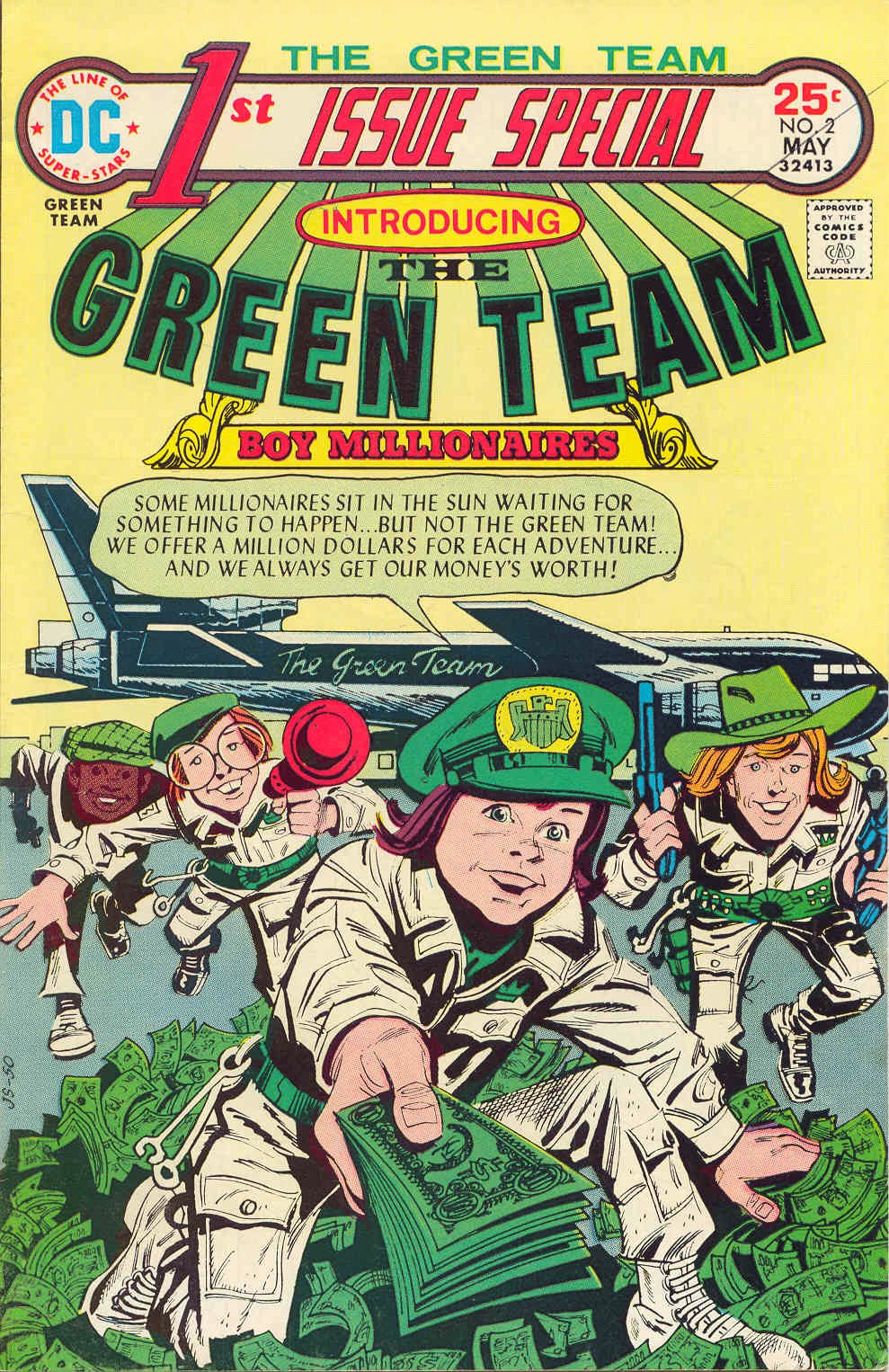 The Green Team
Personal jetplanes, luxury yachts, cash-laden jumpsuits and an absence of parental oversight, what do all of these things add up to? That’s right, celebrity sextapes, but how about also DC Comics’ original answer to the question Richie Rich was just too square to ask, man, it’s The Green Team.

The Green Team has recently experienced a reinvention inside the Nu52 as Teen Trillionaires - where they managed to pull an eight-issue run prior to cancellation. You can’t deny an eight-issue run isn’t too bad, particularly considering that the originals debuted in the second issue of the just-a-little-inappropriately titled “First Issue Special” and then died before anything could come of it except unpublished inventory stories available for decades only as photocopies handed around at cons.

Created by writer Joe Simon and artist Jerry Grandenetti, the Green Team is, of course, lead vocalist Billie Joe Armstrong, bassist Mike Drint and drummer Tre Cool, and they redefined punk for the 90s. Beyond that, the Green Team is, in increasing order of hair length and starting – like all wealth culture does – with the white kids:

Commodore Murphy: A shipping magnate who, despite his youth, dresses like Thurston P.Howell joining McHale’s Navy.

J.P. and Murph score all the choice dialogue and action in the stories, leaving the other two Green Teamers a little less to do. This might have something to do with who they are, simply because: 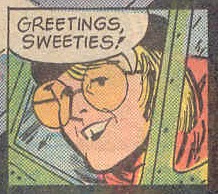 Cecil Sunbeam: Boy film director and the first of two problematic character portrayals in the book, being as he’s a flamboyant, outrageous, Hollywood boheme type, and the implication in his manner of dress and expression is that he might be – and pardon my late Sixties terminology here, but - the fruit of the group.  He doesn’t get enough screen time for us to determine whether this is a sort-of Antonio Fargas as Lindy portrayal of the savage dignity earned by the routinely despised, or if he’s merely a self-indulgent louche whose affectations are a tissue-thin façade for a two-fisted he-man. There's a chance this is my casting modern-day interpretations on an otherwise innocent portrayal, I'll cop. Still, whatever way, he doesn't get it as bad as…

The debut of the Green Team involves a convoluted arc of Abdul Smith, impoverished shoeshine kid from the ghetto whose lifelong dream is to be part of a club – any club, anywhere, and considering how poorly whitey treats him throughout this story, may I suggest the Black Panthers? How about the Nation of Islam?

Abdul eventually gets to join the Green Team, not because of his intelligence, drive, ambition or ingenuity, but because of an accounting error; the thirty-two clams in his bank account (which is, I believe, actually a million dollars in today’s money) is mis-deposited as five hundred thousand clams (or five super-mega-clams, metrically speaking). Before the bank can correct their own error and probably charge Abdul twenty bucks as a penalty, one of the young shoeshine boy’s loyal customers invests it for him and nets him the million-dollar entry fee into the Green Team.

The Green Team is one of Simon’s fairly subversive trilogy of titles for DC in the late Sixties and early Seventies – the other two being Brother Power and Prez – so while it’s impressive that he introduces a black character onto this team, the question of why Abdul has to fail upwards into the ranks of his partners is pertinent. There are black millionaires to be used as examples in this era – athletes and performers not the least of which, with neither career necessarily conflicting with the assorted industries monopolized by the white Green Teamers – but instead Abdul is catapulted from the streets by way of clerical error. If this doesn't seem weird to you, ask yourself why Abdul wasn't one of the original Green Teamers and one of the white kids had to accidentally join the ranks instead.

With Abdul effectively prohibited, story-wise, from every achieving parity with his peers in the team, he is left little choice but to remain “The other”. He actually ends up shoved to the side in subsequent adventures (and even on the cover, where he lingers so far in the back as to be practically absent), when in reality he’s the only Green Teamer to have been given any sort of backstory. Even in the 2013 revival, Abdul – the only African-American member – was jettisoned in favor of an Arabic prince. Abdul kind of deserves another shot.

In their pursuit of further wealth, the Green Team funds bizarre projects and, when the time comes for them to take a direct hand in protecting – or shutting down – their investments, they get decked out in fancy little green Dickies with four combination-locked pockets used to carry CASH MONEY. Even Don Draper had a Diners Club card – still, each member carries around a quarter million on them at all times, and then use them for such daring and innovative activities as – throwing it all on a roof and running away (this is true). I think this is actually part of their strategy to quickly divest Abdul of his million dollars so they can kick him out of the club and get back to telling jokes like "What would you call the Flintstones if they were black?" "Haw haw, good one Cecil!"

The Green Team advertise themselves via billboards bearing such enticing Craigslist-murderer-bait as "Boy Millionaires seek ACTION!" and "MONEY for THRILLS! ... We Pay for Play!" Another board reads "WANTED - Adventurous boys to join the GREEN TEAM" and then by way of small print, "Must Have A Million Dollars" all of which sounds suspiciously like a really transparent NAMBLA scheme. "Clean-Limbed boys wanted for big, exciting adventure. Must have million dollars, be willing to travel to Thailand. Orphans with no kin preferred."

As for the actual stories; Joe Simon was in a weird place with a lot of his DC work, undoubtedly unaided by the outright antipathy powerful editor and living harassment generator Mort Weisinger had towards Simon’s youth-celebrating work. In Brother Power, there were Nazi bikers and a villainous President Reagan (or “California” as I like to call it), in Prez there were robot chess maniacs and legless vampires, and in The Green Team there was down-on-his-luck Hitler and something called – lord help us – Professor Dinkle's Great American Pleasure Machine.

Rather than a novelty eatery at the upscale mall, the Great American Pleasure Machine (now the invention of Professor Apple. Poor Dinkle got recast. Long story) is a machine which is so adept at delivering pleasure that it’ll drive all entertainers out of business. That’s why a destructive marching band of evil is assembled to tear it down, and if they won’t do it then the comic book characters. Then, after that, the hookers!

Via a text piece in the back we gain insight into the origins of the Green Team, specifically that it's the invention of the heretofore-unseen P.T.Green, a multi-millionaire who pulled himself up from humble origins and decided to give back to the world by inventing an adventurers' club for idle rich kids (despite the fact that we already have one of those, it's called "The Kennedys"). Why he didn't form a club to assist the same kind of underprivileged kids he himself once was, I dunno, except I feel like it's a metaphor for capitalism in some way.

Next Wednesday: The Unpublished Adventures!

I recall that the previous version of this had the sentence "The only story I want to see these guys in is one where the Dingbats of Danger Street kill them with shivs." I mainly recall it because for some reason that was one of the funniest sentences I've ever read.

Yeah, on reflection it seemed mean.

I mean, I WOULD like to see the Dingbats and Green Team in a shiv fight, just not in a mean way.

One of those upbeat shiv fights.