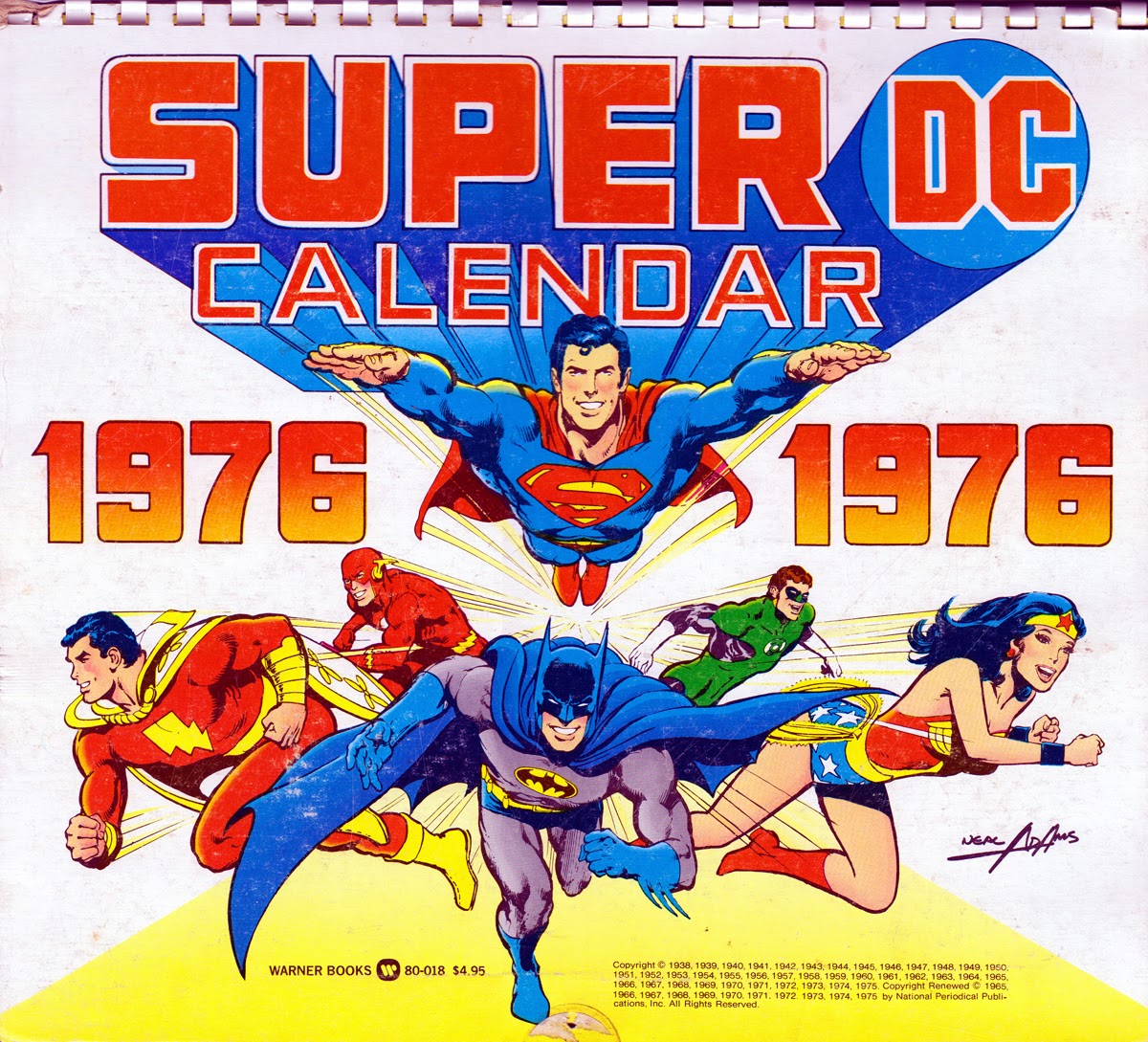 It’s July 16th, but I actually want to talk about yesterday (I would’ve brought this up for yesterday’s update, but those Batman Leads An Interesting Life things are good for the Google rankings); July 15th, the saddest day of the calendar year at least as far as goes the DC Universe – the day Dick (Robin) Grayson’s parents, the Flying Graysons, were assassinated by the insidious League To Destroy All Circus Aerialists.

By happenstance, it also happens to be your humble editor’s birthday, a pair of facts which have been inextricable in his mind since a copy of the Super DC 1976 calendar first fell into his fat little pre-adolescent mitts back when he was a wee’yin and phones still had cords.

Comic book companies have been producing calendars for decades, and the chances are good that you can wander into the bombed-out ruins of your local Barnes and Noble and find a deeply discounted 2014 calendar featuring the same twelve “classic comic book covers” you always see reprinted across any licensed media which has bought the rights. There was a brief period in the burgeoning days of the comic-book-related material marketplace, however, where nerd-centric branding was really beginning to stretch its feelers, and there was a brief burst when EVERYTHING had familiar comic book superheroes on it (if you were transported back to that era, of course, it would resemble THIS era, except with less shit to buy) – rubber erasers, pencil sharpeners, pillowcases, socks, t-shirts, record players, giant cardboard cutouts, flashlights, um, flower pots, uh … kites. Probably I don’t need to list every known type of thing you can buy, I’m sure you get the idea.

During this period, in the late Seventies, the novelty calendar craze itself was beginning to take off, and DC and Marvel Comics both jumped on the bandwagon. DC in particular invested in a trio of calendars which contained original art and content, between the years 1976 and 1978 – the latter was a sort-of year-long numbers puzzle tied into a massive world-shattering event which slowly built in captions throughout the months of the year and was resolved in the December slot, involving a veritable army of DC’s super-heroes and villains – the first-ever “event comic”, perhaps? I’m going to say “yes” so that I can be the guy to whom future generations will build their monuments. “He posited that a calendar was the origin of a trend in mainstream comic book publishing” they will say futuristically, using telepathic pheromones or something, gesturing with six-fingered hands at a statue of pure gold. “We hate him so.”

The 1977 calendar focused on a hero each month, pointing out important character and event debuts from the character’s history which had happened that month, but 1976 – that year did something somewhat unprecedented; Practically every day of the year was assigned a birthday for a DC super-hero, villain or supporting character, with a few other days set aside for notable deaths and other events. This is an odd enough idea for a calendar – hey, Mick (Heat Wave) Rory was born on March 13! Perry White hired Clark Kent on June 30! Gosh, it’s gonna be a full year, I better buy greeting cards by the box – but what was stranger still was that some of the dates made it into canon.


July 11, for instance, is listed in the book as Superman Day, which roughly coincides with the Superman Celebration held annually in Metropolis, Illinois, since 1978! Likewise, both Superman and Captain Marvel have their birthdays listed as being February 29, which has leaked into canon - or preceded it, to be fair I’m not sure. Either way, it seems to imply that some of the other vital dates on the calendar – Ted Grant first becomes Wildcat on July 19, Supergirl adopts Streaky on August 14, the first Bizarro was destroyed on October 8 – must also be in canon, and that weirdly almost no two heroes and/or villains ever share a birthday. Weird.

Now, some dates currently in canon – or even fan-canon – aren’t on the calendar; the third Monday of May, for instance, is surprisingly absent of any event whatsoever, which is fortunate because that is – as revealed five years later in Eliot S.Maggin’s Superman novel Miracle Monday, the day we’re to celebrate the anniversary of the day Superman beat Satan. Could it be – eerily prescient, on top of everything else? Sure, why not?

Still, I can recall the delight with which I studied every day of the calendar in order, leading up to the mid-year event of my birthday, excited to see which hero or villain had been born the same day as I was, or what important comic book event – more vital to my tiny brain than all of world history combined, of course – coincided with the event of my entry into the universe, and lo and behold it’s when Robin’s parents started eating dirt forever. I won’t say that my subsequent immediately dampened enthusiasm fostered a persistent cynicism which has all but defined my adulthood, but I wouldn’t be surprised if they made a new Super DC calendar in the future which declared July 15 “The day the guy who writes Gone&Forgotten got really bummed out about a dumb comic book thing”.

Well, no, wait, that would be pretty surprising.

Could be worse. I apparently share a birthday with Red Tornado.

At 44 years old, I had to be told by the Superman of 1976 that I was born on something called "Bill of Rights Day".

I am what's wrong with America.