DEFENDERS WEEK: DEFENDER FOR A DAY 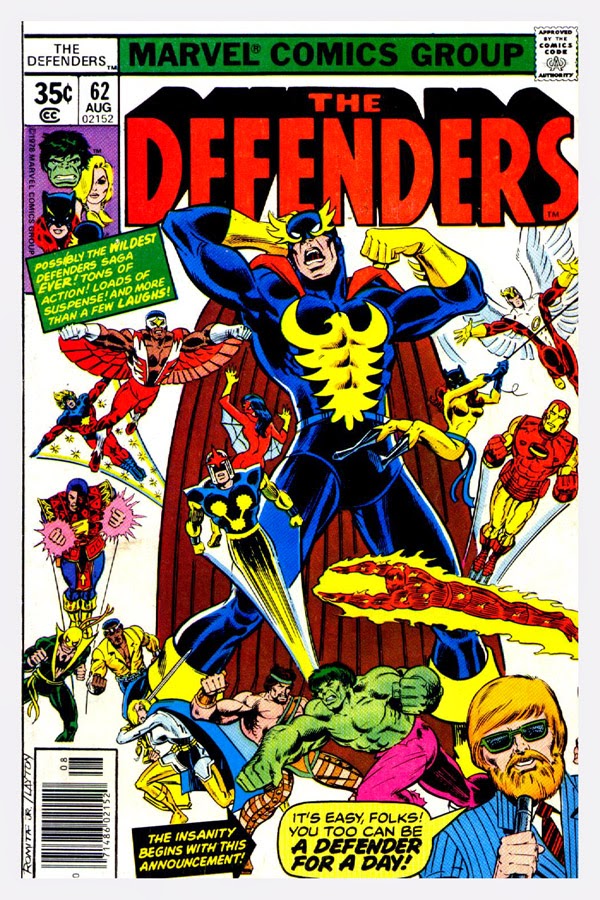 Although the Defenders, in their assorted incarnations, comprised one of Marvel’s longest-running teams (if we had to put a number to it, how about we describe it as “fourth”), they never really had their Galactus Moment. Under the pens of Engelhardt, Gerber and Kraft, Marvel’s premiere “non-team” had their share of memorable conflicts and long-running storylines, but it’s tricky to point at any one arc and declare it their “Days of Future Past” or “Kree-Skrull War,” a storyline which succinctly defines the scope of the team’s influence and defines the boundaries of their conflict.

Certainly the closest which The Defenders ever came was a three-issue arc running from issues 62 through 64 (August through October 1978) popularly recalled as the Defender For A Day saga (because in superhero comics, anything longer than twelve pages is an epic, anything that covers two issues is a saga, and a year’s worth of stories is known as “All that mankind has committed to its vast wealth of knowledge”).

David Anthony Kraft helmed this spandex gangbang during a period where the Defenders had relocated to a country estate and effectively shrunk down to a quartet of members – Nighthawk, Hulk, Hellcat and Valkyrie (comprising what was at the time, by the way, the most gender-balanced superhero team pretty much in history. But they don’t get written down in the history books for that, they get in for the Hulk eating beans). The defining characteristic of the Defenders at this point had been its status as an informal assembly – unlike the Avengers, X-Men and Fantastic Four, which had distinct memberships and by-laws and meeting tables and mugs with their logo on it and everything (honestly, how often have you seen a superhero in a comic book drinking coffee from a mug with the team’s logo on it? Hundreds, right? You just never noticed til someone mentioned it).

By contrast, the Defenders were such a loose-knit group of dabbling do-gooders that they somehow allowed a beardo film student into their lives. “Dollar Bill” is a man who, these days, would have strong opinions about how misandry is real and a series of OK Cupid profile pictures that were nothing more than a photo of the outline of his dick in boxer-briefs, but in the late Seventies he was necessarily an eternal grad student. One of the invasive, self-obsessed Bill’s film projects involved a brief documentary of the Defenders’ exploits, broadcast on local television, which advertised that the Defenders accepted ALL members, just by dint of declaring yourself a member.

The end result of the broadcast was a passel of super-heroes showing up at Defenders HQ in upstate New York, eager to join up. The premise is fun enough, but right about the time the heroes show up, everything falls apart. For one thing, it’s a collection of pretty much every unaffiliated and lightly-affiliated superhero in the Marvel roster, no matter how obscure (Tagak the Tiger-Man), otherwise-committed (Ms.Marvel, Captain Marvel) or regionally challenged (At least two of them were supposed to be stationed in Los Angeles at the time).This isn’t even mentioning the heroes advertised on the cover who never showed up inside (Power Man and Spider-Woman, f’r instance).

While assorted heroes are goofing off on the ranch and trying to get into Hellcat’s pants, some villains get the idea to also declare themselves Defenders and begin a confusing crime spree in the city. A rebellious teen gets the same idea and steals a car and a couple purses along the way, but he’s white so the cops let him live. Those heroes who didn’t bail out early on gather together to round up all the baddies and it all works out in the end, but it’s a real roundabout way to get Son of Satan to join the team.

I suppose it's also worth mentioning a bit where Captain Ultra gets pretty MRA on Hellcat's flirting ass, except while I think that was supposed to be funny it, y'know, most generously did not age well as a bit. Luckily, we don’t get The Falcon going off on airplane food or Iron Fist asking what’s up with the little things on the ends of shoelaces.

Defender for a Day is a tough slog, but it accomplishes something concrete by establishing the character of the team for many more incarnations as a group of really ill-suited roommates unwisely trying to share the same space. Which it may sound like I’m putting that premise down, but I’m not – if the Defenders are fantastic for anything, it’s imagining what the downtime in their big clubhouse must be like. Nighthawk trying to be “down” with Luke Cage’s music, the Red Guardian replacing all the furniture with leather fold-out couches, Iceman coming home drunk with Ghost Rider and having to help put out the fire when Johnny Blaze pisses himself in the night. “Doctor Strange, if your manservant and girlfriend are going to live here, they need to start chipping in for the utilities!” A bottle in the fridge labelled “Hulk’s Milk DO NOT DRINK (THIS MEANS YOU NAMOR)” Complaints about Andromeda leaving her metal breastplate hanging in the shower.

I mean, I’m on record as hoping that’s what their upcoming TV show would be like, but it strikes me as sadly unlikely.

For me, the closest the Defenders came to their Kree-Skrull War epic was that stretch of stories from issue 93 or so that culminate with the team going to Hell itself. It resolved a lot of open arcs and resulted in a new direction after it ended. (And it was fun as hellfire to boot.) But this Defender for a Day arc certainly qualifies, as well.

Greatly enjoying this series of posts!

Love the post. Especially the Captain Ultra/Jack of Heart clip. When I was younger, loved this story arc. So many characters... I mean- Stingray! Yeah!