WILD WORLD OF WONDER WOMAN : CHRISTMAS WITH THE AMAZONS

It's a Christmas miracle! I mentioned back at the beginning of the month that the site would be taking a break during December while I prepared new material for 2015. Well, while preparing the aforementioned new material, I came across this delightfully pervy, immensely enjoyable - and sort-of seasonally appropriate - Wonder Woman story from the character's original Golden Age run, and I had to share it with you. In many ways, this is the greatest present of all.

An untitled 1943 tale (Wonder Woman vol.1 No.3, Feb-Mar 1943) finds both Wonder Woman and her civilian disguise of Diana Prince dealing with the machinations of her archenemy, Paula von Gunther. Although the Nazi hypnotist and slavemaster has escaped, leaving a pair of innocent co-eds framed and facing terrible punishment for her crimes, Wonder Woman is sidetracked by a mental radio message from her mother Hippolyta on Paradise Island - It's almost Diana Day! Also, she never calls her poor mother, what,she can't visit once in a while?

Billed as"the Amazon Christmas," Diana's Day - explains Wonder Woman to her paramour Steve Trevor - is the Amazonian celebration of the Winter Solstice, when the mythological (or, for Amazons, "real") Sun God begins his return to Earth. One Amazon every year is chosen to don an identity-concealing silver mask (I call this look "Amazononymous") and portray the moon goddess Diana (no relation) (not back then, anyway), a sort of "Miss Santa Claus of Amazonia," who celebrates the imminent return of the lunar deity's solar sibling by dispensing gifts to her rough-and-tumble sisters.


(As an aside, it's a revelation to see how the relationship between Steve Trevor and Wonder Woman was handled in its infancy, particularly given the awkward uncertainty every creator since Mr.Marston (and Mrs.Marston and Ms.Byrne, of course) has basically fumbled the effort. Here, Trevor is portrayed as masculine, confident, proactive and assured, yet absolutely comfortable in his partnership with a woman who is clearly his mental and physical superior. As progressive portrayals of relationships go, this one makes many modern super-hero genre attempts look like dumb mud.)

Wonder Woman returns to Paradise Island and, after a charmingly huggy reunion with her mother, dons the silver mask and gets to giving gifts. It doesn't take long for one of the other Amazons to jump the masked Diana. Apparently, if you can defeat the Amazon portraying the moon goddess in an impromptu clutch, you get to don the mask and deliver gifts in between getting jumped by all the other broads. If you lose, well, first off ...


As morning is still a ways off, Diana goes about giving her gifts to her Amazon sisters - sports equipment from Man's World! I was struck by the fact that this is a super-good gift idea! The Amazon culture is a supremely physical culture, but these sports will be completely new and exciting to them, and will expand their horizons while allowing them to revel in their comfort zone! Good gift giving, Diana! Is that another one of her super-powers?

Of course, the Amazons at first use the strange playthings to attack one another, and also ...


Morning comes, and the Amazons who tried to jump "Moon Goddess" and got their asses handed to them are untied and decked out in Bambi's leotard.

This begins a hunt through the woods of Paradise Island, where Amazons using sucker-tipped arrows capture the running does. Wonder Woman's tubby gal pal Etta Candy gets about on a Kanga and uses a lasso to capture herself some does, because what would happen if this story went three panels without a woman getting tied up? Madness is what.

When the does are captured, they're brought back to camp in a truly dignified manner.

The role playing doesn't end quickly, though, as the captured Amazons are slightly-more-than-metaphorically hung out to dry, "skinned", then trussed up like cornish game hens where they're sort-of pretend cooked to death? I'll let the scene speak for itself ... 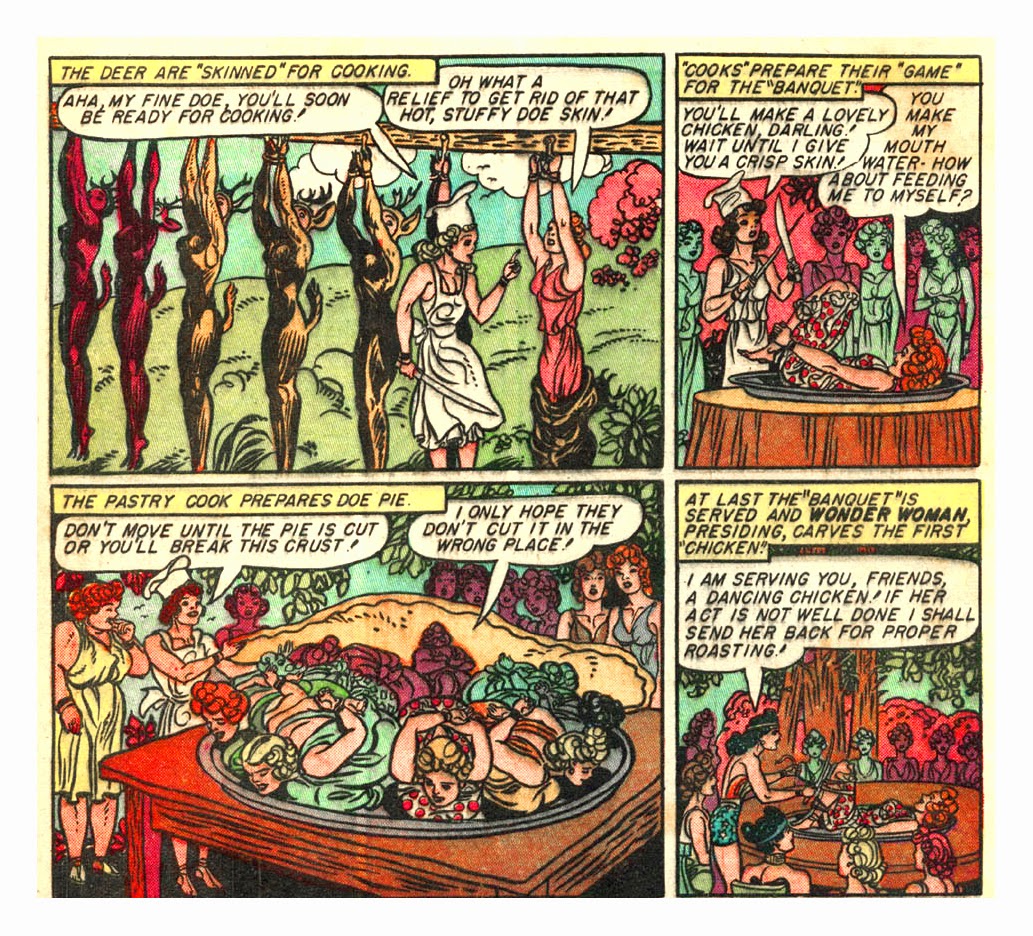 That's where the fun basically ends, as one of Paula von Gunther's female slaves abducts Etta, subdues Wonder Woman, then leads the Japanese armada to the Island. Luckily, plucky Etta - "I may be fat like you say girlie but WOO! WOO! I got personality!" she cries and she shoulder-checks her captor with a flying tackle - frees Wonder Woman and allows the amazing Amazon to not only rout the Japanese forces, but return to America to liberate the accused co-eds and even convert Von Gunther to the side of the angels. All of that happens in a relative flash, though, because my mind is still hovering somewhere around the image of smiling Amazons trussed under a pie shell and one of them forced to dance like a chicken. I dunno about you, but next year I'm starting a whole new holiday tradition!

And as my final present to you, here's Wonder Woman wrestling with Paula von Gunther's slave, who's just straight-up slugging her in the head.

You can see why they call it Paradise Island. I'd love to go there. I bet they are really welcoming to men too, right? Right?