Bless the hearts of major corporate entities in their efforts to monetize the act of teaching children about ecological awareness and conservation. Without such naked cash-grabs masquerading as noble sentiment, we never would have had classic comics such as ... BRUTE FORCE!

Published by Marvel Comics (middle name: "We'll License Anything") in a four-issue limited series between August and November of 1990, Brute Force was a team of cybernetically enhanced wild animals billed as "Protectors of the Environment" and all of them had missiles or guns or something. It's wild that mainstream culture will demonize something like Greenpeace or Earth First but, when given the opportunity to show their audience an idealized ecological fighting force, they pick fucked-up animals armed with uzis.

Brute Force ends up being the invention of Doctor Randall Pierce, one of those interminable 90s scientists sporting a ponytail and besaddled with "ideals" and "dreams" and other things ruined by corporate culture, like he invented it. We all got jobs, Randall, don't make a production out of your midlife crisis.

Unusually, for a heroic scientist and inventor of the protagonists of the book, Doc Pierce is also super-into animal experimentation, and we're introduced to him right in the middle of surgically affixing armor and a pair of fully-stocked bandoleers to an ailing gorilla. One time my lhasa apso got really sick and the doctor gave it tank treads and a back-mounted bazooka, so I can attest that Doc Pierce really knows his stuff.

As is the wont of these things, the local corporation is the bad guy. Fronting a terrorist gang based off the mascot of a massive fast food chain - which Doctor Pierce nonetheless fails to recognize until his burger-scarfing offspring throws garbage around his nice, clean laboratory - is Multicorp, led by the insidious Mr.Frost. Now, in books like this, the bad guy's plan almost always involves profiting from the despoiling of natural resources, so you'd be forgiven for assuming that Frost was aiming to pour oil into an orphanage or turn Niagara Falls into a toilet for paying CEOs or something like that.

Multicorp's actual plan, however, is to breed plant life which feeds on pollution. This is ... not an evil plan, even remotely. This is a GOOD plan. This is something people actually do, there are all sorts of lab-engineered bacteria which eat oil and biological contaminants and produce relatively-to-totally harmless waste products as a result. But Mr.Frost sneers a lot when the cameras are off, so he's got to be fought with armored animals.


Brute Force is assembled from the actual endangered species which Dr.Pierce keeps in his lab. You know, he experiments on these endangered species. In order to stop the pollution-eating plants. Good guy, Doctor Pierce, certainly deserves his leading role, which is what he gets when he suits up his animal "pals" and amps up their intelligence with some sort of mind-control helmet, which is another thing a good guy wouldn't do. 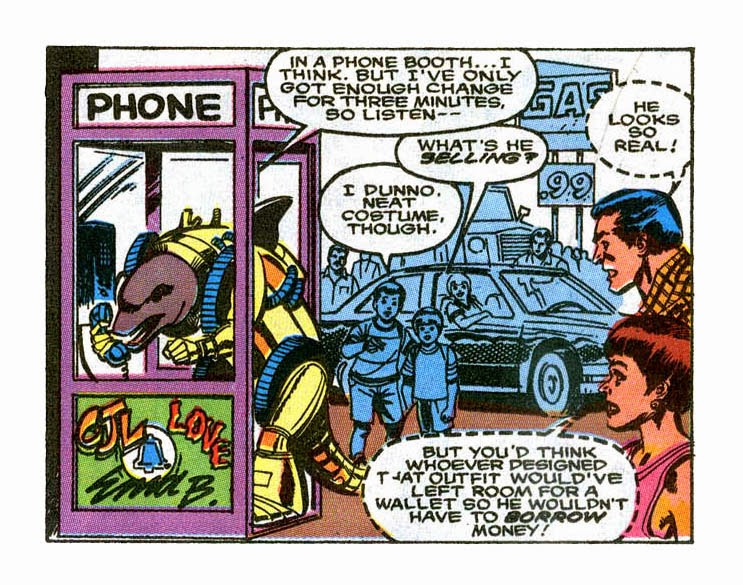 Brute Force faces off against an opposite number comprised of armored, intelligent evil animals - you know, all the bad animals you're not supposed to like, even though half of them are just as endangered as Brute Force. Moutain gorillas and white rhinos don't got it any easier than bald eagles, man, give 'em a break.

So the bad mechanical animals are Armory (an octopus), Uproar (a gorilla), Ramrod (a rhino), Bloodbath (a shark) and Tailgunner (a buzzard or something), and they hang out under the name "Heavy Metal," because I guess those are all the most metal animals.

Brute Force ends up defeating Heavy Metal and putting an end to Multicorp, which means the world was denied pollution-eating plants, so thanks for that. I don't imagine there's a negligible carbon footprint involved with that fifteen-foot tall tank they let the bear drive around, is there? We could've used a fern with a hankering for carbon monoxide more than we needed a copper kangaroo and four even dumber ideas...

I believe that this was one of the properties that Marvel created and put out as a mini-series in an attempt to REVERSE the normal flow - they wanted some toy or animation company to license these characters from Marvel.

of course, ironically enough, Marvel would go on to own/be owned by animation and toy companies, but I don't believe either of those had happened at this point.

Hm, that's very possible - I wasn't aware that Marvel started manufacturing their own licensing attempts - Even Crystar was merely an ultimately flubbed marketing endeavor. You happen to know of any others generated out of whole cloth at Marvel?

Crystar is the other one I was specifically thinking of. I was never a fan of most licensed books, so my knowledge is pretty limited.

My co-workers must be wondering why I am choking back guffaws right now. Totally hilarious.

I really want to see a panel in which Wreckless jacks a car to rescue his friends. "Get out! BEAR IS DRIVING! HOW CAN THIS BE OTHERWISE?"