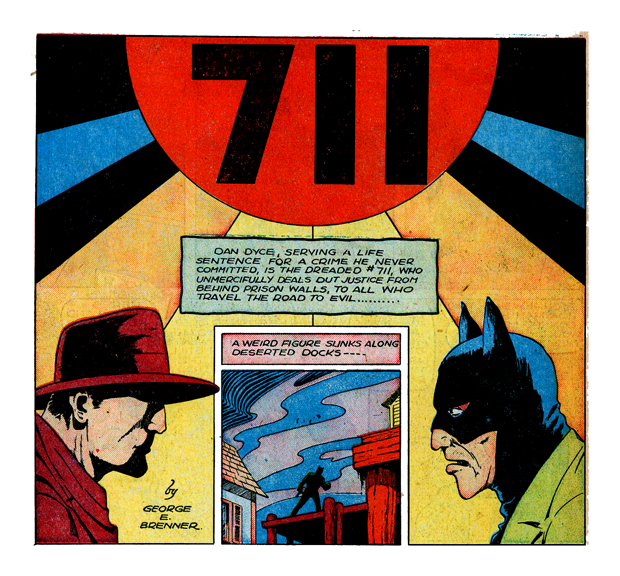 He dresses like a bat and he will hit you dead with a brick. There's probably never before been a costumed crook who wore his villainous identity so explicitly, but then that's the very subtle criminal mastermind that is Brickbat!

Debuting in Police Comics No.5 (December 1941), Brickbat was a violent and murderous enemy of 711, a superhero bearing one of the Golden Age's oddest gimmicks and also a convenient place to pick up a carton of milk for the low price of about seven bucks and eighty four cents. 711 was actually Daniel Dyce, a well-meaning and law-abiding citizen who nonetheless ended up in the pokey for a crime he never committed. Every night, he'd sneak out of jail to confront criminals and then, after beating them to bloody messes, would return to his cell, which is exactly the same thing I'd do in his circumstances except for that last part.

On one of the occasions during which Dan slipped out of his confinement, the baddie he encountered was Brickbat, a death-dealing devil in a spiked cowl and lime-green suit - so he's also a fashion plate! Having enlisted an unscrupulous scientist to develop his signature deadly weapon - a brick which breaks apart upon impact, releasing a deadly gas - the Brickbat's lust for death and greed for smashing people in the face with poison bricks is so great that he promptly murders the creator of his weaponry so no one else will learn its secret (hint: it's a breakaway brick with poison in it).

Apparently it's not enough to merely smash people in the head with bricks, which is pretty much what Brickbat does half the time anyway. I can't say for sure what benefit the poison brings except flair, and maybe a little extra insurance in case his aim is off or the intended victim has a super-hard head, but he's got them so he may as well use them.

In fact, he's got a lot of them, and he's capable of hurling them in a "machine gun-like" fashion. I guess it's also notable that a single brick is pretty portable, but a whole armload of them is kind of a bear to carry, and you're bound to drop one, at which point you're going to release poison gas ... did Brickbat think this through? Again, one brick, no poison, easy to carry, can be re-used to murder time and time again - across the board, it's superior to the poison breakaway brick.

Anyway, 711 disarms Brickbat by standing in front of a window, through which most of the thrown bricks end up, killing a whole bunch of Skid Row bums I'm sure. With that, 711 returns to his exciting life of incarceration, with Brickbat joining him in a nearby cell ... a cell surrounded by bricks! Ah, irony!
at 9:00 AM

This reminds me of 'CockPunch' the character that used to dress up like Punch and Judy and slap people around the head with a male chicken.

I genuinely don't know what I'd do without you folks.