IN DEFENSE OF ARM-FALL-OFF BOY

Since The League of Regrettable Superheroes was published, there are a few criticisms I tend to hear repeated. About half of it comes in the form of folks offended to see favorite - or, at least, much-beloved - characters included in the roster which they mistakenly interpret to be a Hall of Shame, and the rest comes in the shape of the hated "You forgot ..."

But I do often hear folks list off the superheroes they felt were "missing" from the book. I can guarantee you that almost none of the recommendations went unconsidered. The original list of candidates for inclusion numbered in at around a thousand.

This was whittled down to the one hundred (and a few extras) which comprised the content of the book. It's important to note, too, that the book was never intended to be (or ever advertised as) either a comprehensive list of every superhero ever which was a near-miss or off-the-mark, or a definitive ranking of the absolute one hundred most absurd, misbegotten, neglected, or what-have-you characters. The entries were chosen on variety and context - the most important factor for inclusion was that there was something interesting and, ideally, unique to say about the character. It was never meant to be a holistic catalog including everyone everywhere.

Still, with all that in mind, I often see reviews which accuse me of "forgetting" some particular character (and I'm not sure what folks want me to do about that. I guess I could recall all the books and write a short summary of every missing character in the margins of every copy), and no character is mentioned more often than Arm-Fall-Off Boy.

In the almost-impossibly unlikely event that you are unfamiliar with Arm-Fall-Off Boy, here he is: Debuting in Secret Origins vol.1 No.46 (December, 1989), Arm-Fall-Off Boy was reportedly the very first rejected applicant to the futuristic Legion of Super-Heroes, appearing and failing to pass the inaugural occasion of the venerated Legion Tryouts.

As the name implies, Arm-Fall-Off Boy's power is that ... his arms fall off. "Observe, as I detach my limb" he tells the founding trio of the Legion, doing just as he says, "And transform it into a deadly weapon!"

Arm-Fall-Off Boy was, of course, on the original list of 1,000 candidates for the League of Regrettable Superheroes - how could he not be? The internet listicle of "lame superheroes" is easy-to-manufacture clickbait (I think you'll find, and I say this with love, that MOST superheroes are at least weird, off-putting, bizarre and, yes, sometimes lame, if even only on occasion) and Arm-Fall-Off Boy is pretty much on all of them.

Part of this is owing to the incestuous nature of internet humor - where do you research your internet list? Why, on the internet, of course! And there's Arm-Fall-Off Boy - on "The 15 Lamest Superheroes of All Time," and "Twenty Superheroes With Useless Powers," and "The Ten Dumbest Superheroes Ever Conceived," and so on, and so on.

The thing about Arm-Fall-Off Boy, though, is that he's actually just perfect for his intended purpose. Arm-Fall-Off Boy was originally intended as a satirical take on the often-absurd powers of the Legion and their prospective members. Keep in mind that this was the highly-imaginative Silver Age organization which included heroes like Matter-Eater Lad and Bouncing Boy, and once admitted a fellow named Nemesis Kid without realizing that he might be a bad guy.

The insistence among fandom that Arm-Fall-Off Boy must be "lame" because he's not some sort of standard-issue superhero with enviable paranormal abilities or vigilante skills - because he's not serious - is one of the big problems with mainstream comic readers in general. There's a disinterest among the audience for enjoying anything once it leaves a particular milieu. Mainstream comic fans either want their street-level vigilante, their grim avenger, their upbeat retro-friendly superhero, their knockoff Batman, their knockoff Superman, their 90s artifact, Silver Age antique, Bronze Age comfort, or they want nothing at all.

Once fandom becomes constricted by a concrete avenue of mortified preference, it tends to foment a genuine incuriosity and absence of tolerance of anything which doesn't fit a very narrow idea of a "valid" character. This is particularly tru among the superheroes themselves, and that's an attitude that serves both the reader and the industry very poorly indeed.

With all of this in mind, then, I'd like to officially say that the reason Arm-Fall-Off Boy wasn't in the League of Regrettable Superheroes is that he wasn't regrettable. Additionally, he's not lame, he's not stupid, and he's not useless. He's perfect for exactly what he was made to do, and as long as this blog exists there's one place on the internet that considers him absolutely fine. 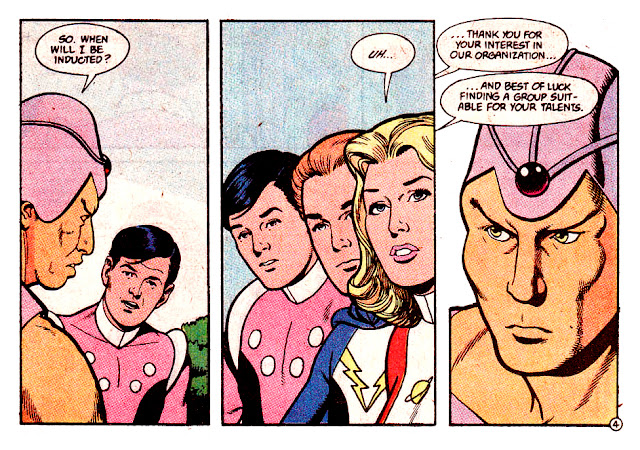 PLORP is the THWIP or SNIKT of its time.

Hear, hear. Arm-Fall-Off Boy remains great. I'll admit to using him in a Top 5 list I wrote years ago, but in my defense the title was Top 5: DC Characters Who Lost an Arm, Appendage, or Limb and the whole thing was just a big ball of silly. http://ifanboy.com/articles/top-5-dc-characters-who-have-lost-an-arm-appendage-or-limb/

But...LoRS had Lightning's Captain Marvel, who was Everything Falls Off Guy. How can you top a guy with a detachable head?

I was slightly disappointed that Tod Holton, Super Green Beret wasn't in there--who goes back in time to literally not kill Hitler--but there's enough four color insanity for another book or two.

SPLIT! was the PLORP of its time.

I am pretty sure that Arm-Fall-Boy was created as a joke within Legion fandom, perhaps in the 1970s fanzine Legion Outpost. The creators of the actual comic later picked up on it.

Cypher is another character you ALWAYS see on the "lame superpower" lists (often at #1), which speaks to the priorities of many comic book readers, who don't see the appeal of being able to communicate with and understand every person you come across.

That is absolutely one of my hot-button issues right there; Doug Ramsey has one of the best super-powers possible. No foolin', his is absolutely my pick whenever I've been asked what hero's powers I'd most want.

Mind you, I still included him in the book because it's not exactly a super-power that stops bullets (as evidenced by ... how he didn't stop a bullet)

That is absolutely one of my hot-button issues right there; Doug Ramsey has one of the best super-powers possible. No foolin', his is absolutely my pick whenever I've been asked what hero's powers I'd most want.

Mind you, I still included him in the book because it's not exactly a super-power that stops bullets (as evidenced by ... how he didn't stop a bullet)

X-Men was my re-entry to comics as an adult in the late 80s. I was startled when I saw Cypher. There's a mutant who has a power that doesn't work only in hand to hand combat? One that he could get an actual job with? In your next job interview, try saying "I'm the best at what I do, Bub!" and then slip some sporks out from your sleeves. While weather control is awesome, I think I'd find better ways to use it than shooting lightning bolts at the Blob.

The dumbest X-character I remember, and I'm sure I'm alone here as she was around for half an issue, was Fangface. Evolution had granted her the ability to morph into a dragon. "Wow," I thought, "there's a gene for that, I guess." She was killed immediately. So Cypher lasted much longer. Not as long as he would've translating at the UN, but still.

I was going to say "At least Fangface didn't have the gene that morphed her into a slime mold!" But then I remembered X-Men 3, with Pufferfish Face. "The mutant--whose hugs can break your skin!"

This post was one of my favorites, and a great example of why I enjoy this blog so much. Not surprised to see Doug Ramsey turn up in the comments section. I agree that Doug had one of the greatest superpowers ever. My problem lay with the decision (both on the page and in real life) to put him on the frontline of conflicts between people who could Make Stuff Blow Up. Had he been put into some scenario in which the ideas presented were more than just excuses for oddly-dressed people to hit each other (to be fair, there may be more of those now than during Doug's brief "lifetime"), he could have been a star. Or at least, you know, not so dead.

Even with Ramsey, it was more the example of "way before the time beyond just the "oddly-dressed people to hit each other" thing and when the teams finally found ways to go beyond just the "you can understand anyone in the world" and make it more dynamic for a comic- the "computer languages are a thing...suddenly Ramsey's also the greatest hacker on the planet. Body language is sort of a thing...suddenly Ramsey's got an inpenetrable defense in hand-to-hand combat", etc. Put him in a modern X-series and bring him back to life, he'd be a superstar beyond compare.

The more I think about it, the more I realize that one of the most entertaining stories you could do with Doug Ramsey is that his power to comprehend all communication makes him understand the almost intolerable privilege he enjoys as an upper middle-class white boy attending a private academy for "special" children, and it damn near crushes him with guilt.

Not to nit-pick, but he isn't so much Arm-Fall-Off Boy as he is Arm-PULL-Off Boy.

This reminds of once seeing Dr. Bong on a list of worst comic book villains. Apparently the writers didn't realize that the entire POINT of Dr. Bong was to be ludicrous.