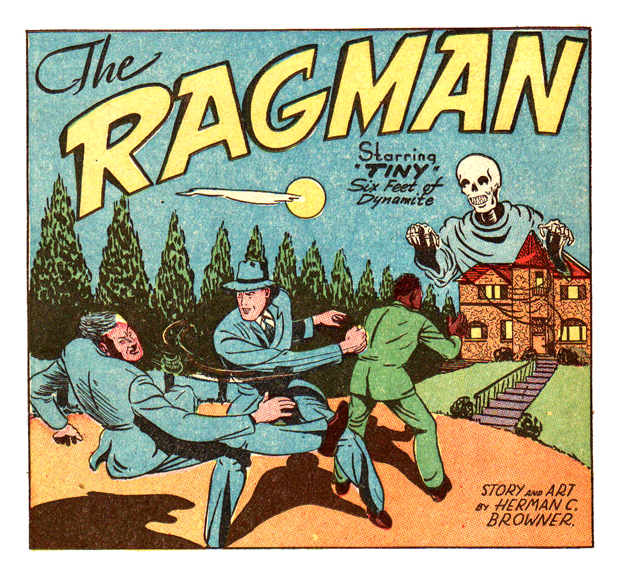 Your Humble Editor's fascination with z-list superheroes goes back to the days when Moses ran after-school errands. I can clearly remember a time, in kindergarten class, when we were playing superheroes. While the other kids quickly sorted through Batman, Spider-Man, Superman and The Hulk ... I picked Ragman. Not only did my five year-old self choose to play the role of the hero of Bob Kanigher, Joe Kubert and the Redondo Studios' abbreviated five-issue series, I was actually nervous that one of the other kids would pick him before I got a chance to.

Admittedly, my fascination with Ragman had everything to do with how cool he looked jumping over his own name in a quarter-page ad which ran in DC Comics at the time. Still, Ragman has, in fact, remained one of my favorite characters, and I'm of the opinion that he's never been better written nor drawn than in the original 1976/1977 run of the book (or, at least, not in any of the subsequent versions which I'd read). Imagine my surprise, with that in mind, to discover that Ragman wasn't actually the first Ragman -- there was also The Rag-Man!

Alternatively credited as Ragman, Rag-Man, The Rag Man and so on, the original bearer of the name Ragman debuted in the first issue of Holyoke's Cat-Man Comics (which itself suffered an on-again, off-again relationship with its hyphen -- this seems to have been an epidemic at Holyoke ... or should I say Holy-Oke! I should not, no).

Jay Garson Jr is a socialite, bon vivant, and crusading crime reporter for the Daily Star. Mysterious crooks, angry at Garson for "breaking rackets and solving crimes" via his regular column, lure him to a desolate stretch of road in the middle of nowhere - and shoot him dead!

Well, they think they have, anyway. Who they actually shoot is a harmless bum who happened to be wandering the side of the road when Garson stopped to ask directions. After asking the hobo if he'd seen any accidents or other "excitement" in the immediate area -- in what, frankly speaking, sounds like a pickup line, but who am I to judge -- the panhandler utters some of the saddest last words ever uttered. "No sir, bud" he tells Garson, "I ain't seen nothing -- I'm looking for a nice cozy bench to sleep on for the night!" Then he is shot to death by a sniper's bullet. This is the "baby shoes, never worn" of shabbily dressed superhero origins.

Garson notices that the bum "looks enough like me to be my twin brother" and embarks on a frankly illegal and equally unethical plan. Switching clothes with the unlucky corpse, he decides to take advantage of his apparent death to become a mysterious avenger of the night, unknown to his foes and having no loved ones they can threaten. And so, in honor of his shabby stolen clothes, becomes the Rag-Man!

Rag-Man is one of dozens of characters who take their inspiration - in large and small measures - from Will Eisner's The Spirit (The iconic windows from the Spirit's graveyard hideout are featured front and center in an inaugural fight scene, as the most telling clue).

One thing which Rag-Man had that the Spirit didn't, however, was a career and a profoundly incurious editor. Despite being dead, Garson would anonymously submit stories detailing the Rag-Man's latest victories to the crime desk at The Daily Star, baffling the chief -- up to a point. "It's written by Jay Garson Jr. We're not carrying his column any more he's dead!" he blurts in exasperation, summarizing in conclusion "I give up" as he throws the paper down. The Star wasn't known for connecting the dots, evidently.

Much of Rag-Man's accouterments are ditched halfway through the character's run (following a year-long absence from the pages of Cat-Man). His suit of rags starts to look pretty natty, his frustrated editor is written out of the scripts and he's actively and publicly contributing to newspapers again (This time around, the Midtown Sentinel). He even uses Garson's Park Avenue address as the public home of the crimefighting Rag-Man. It's hard to find much Rag in Rag-Man by that point.

The most interesting thing about Rag-Man, however, might the evolution of his manservant "Tiny." Portrayed in the initial adventures as burly but subservient, pink-lipped, goggle-eyed, easily spooked and expressing himself with a lugubrious Stepin Fetchit patois, Tiny starts experiencing a change in fortunes with his fourth appearance. As Herman C.Browner's credits first appear on the splash panels, so too does featured billing for Tiny - "The Ragman's faithful helper" reads an early example, "six feet of dynamite" adds a pair of subsequent adventures. He's as high-profile as his boss from this point on.

Likewise, Tiny drops the subordinate demeanor, his frantic superstition, and - most importantly - his minstrel show dialect (what remains can be liberally read as merely "Southern" rather than servile, if you're so inclined to identify it). He's decked out in a double-breasted suit, loses his exaggerated features, and begins to act less like Rag-Man's factotum and more like an equal partner.

Where exactly Tiny might've ended up had the series continued is anyone's guess, as Rag-Man bows out after seven appearances. In fact, the real question might be how much further Rag-Man could've wandered away from his roots and still kept the shabby sobriquet. We were possibly only a month or two away from the debut of Nice Suit Man ... and Tiny!
at 9:00 AM