BEYOND THE BLACK HOLE 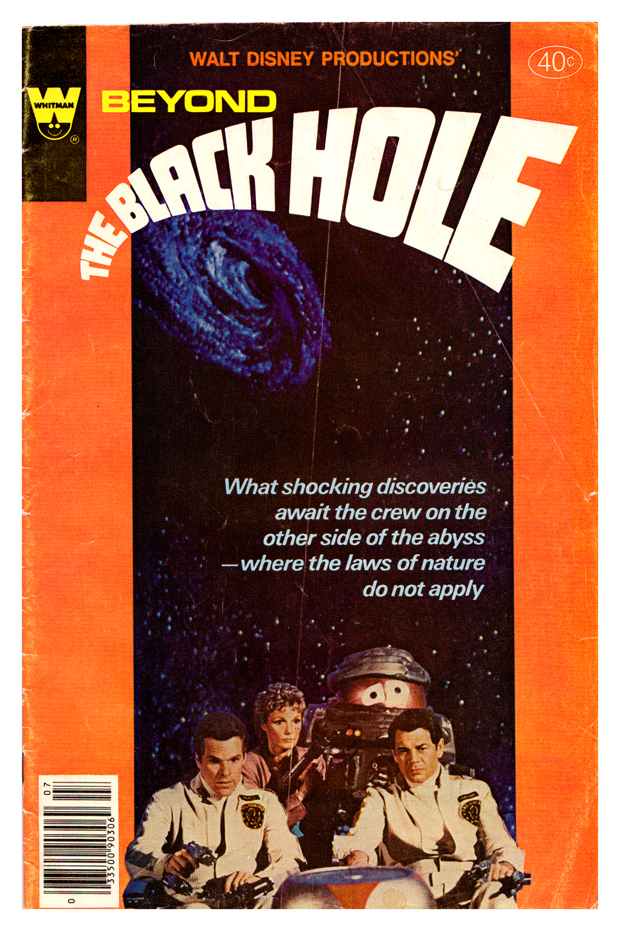 What's beyond a black hole? Nothing, if it holds on to its dreams!

It's been five or six years -- maybe more -- since Disney announced its plans to revive its simultaneously dull and horrifying 1979 sci-fi blockbuster (sort-of), The Black Hole. Chances are even that the planned remake/extrapolation/merchandise-generator has fallen by the wayside, or that it's been supplanted by as many as a dozen additional plans to reboot and revitalize what many consider to be one of the worst sci-fi movies ever made (the last five minutes notwithstanding, as those are merely "puzzling"), but whatever the case -- we don't need it, we already know what happens next!

Back in 1980, Whitman (slash Gold Key, slash Western, slash whatever you want to call it) produced four issues of a Black Hole series. The first two issues adapted the film in loose form; Astronauts in the space vessel Palomino come across an enormous ship, the Cygnus, believed lost but discovered orbiting a black hole upon its event horizon. Somehow. The captain of the ship is insane, all the former crew are robots, there's a mean robot and a dumb old robot and the guys from the Palomino bring a supremely annoying robot of their own, then everyone falls into the black hole and they go to Hell for a little while. Plus ESP and a dead dad, the end.

The next two issues, however, promised the adventure BEYOND THE BLACK HOLE. I've asked this many times, can't we just get beyond the black hole already? This black hole is tearing us apart (or condensing us mercilessly, one of the two).

The one thing which the comic book adaptation left out was the explicit journey through heaven and hell made by the assorted space travelers as they pierced the veil of the black hole itself. Remembered with awestruck trepidation by an entire generation of young moviegoers, the conclusion to the film was the one moment that may have validated the rest of the production, even as it terrified the kiddiewinks. Much like the cyborg lady in Superman III, now that I think about it.

They end up meeting the same villains from the first two books as well as the same allies, except with some foreknowledge which speeds up their escape from the villain's clutches. This is a simultaneous plus and a minus -- the first two issues weren't so riveting that they demanded a repeat, but at least it's over in half the time.

It's in the second and final issue of Beyond the Black Hole where things get spicy. Lacking direction from Disney and left to their own devices, the story abandons all pretense of aligning with the film and simply creates a whole new reality. While all the astronauts had originally been from Earth, the film's villain, Dr.Reinhardt, is now a conquering warlord, setting his sights on the peaceful planet Tyr. How peaceful a planet named after a god of war can be, I dunno, but it does its best.

More to the point, Reinhardt and his robot army are breaking the law. "War had been outlawed in our universe" explains the other-dimensional BOB, a countrified version of VINCENT who doesn't improve on the theme.

In the course of that issue, in an attempt to find the planet of the "Virlights" - virtuous alien beings whose impenetrable force fields drive Reinhardt mad with frustration, as they do all of us - the heroes of the book, in order: confront a woogedy comet, land on a prehistoric planet of wild dinosaurs and mammoths, find another planet, discover a lost child in the forest, are frozen in place, get a bath and have their hooptie stoled.

By contrast to the first three issues, issue four moves along at a breakneck pace. And yet it still finds time to pack in bathtub time, so I don't think printing costs must have been at a premium.


Beyond the Black Hole ends up enjoying all the hallmarks of a Star Trek episode ... Next Generation, anyway, and not one of the good ones. A wan philosophical point, aliens with ethics built into their genetics, wandering around to planets in assorted stages of Earth-like development, the works. It even ends up with all of the main characters wearing embarrassingly short togas, which is an image I'll always associate with Jonathan Frakes, one way or the other.

The final issue of the series is apparently a much sought-after collectible, given its rarity. That's a pretty good quality on which to base its value, because you certainly shouldn't be buying it for the story (the Dan Spiegle art is a-ok, mind you)... but whatever the case, it's poetically ironic that the series ends midway through at a cliffhanger, with many questions unanswered, after a long series of boring interludes. After all, that puts it basically on par with the original film, making a nice neat little wrap up ... until they eventually launch the remake, of course.

I never read the comic but I saw the movie when it debuted in theaters. All I can remember about it is that one of the robots --the evil one, I think-- looked really cool! That says a lot about it that the plot was so easy for me to forget.

I will brook no offense against any movie with a John Barry soundtrack. Also, the design of the Cygnus as a sort of gothic space cathedral was really unique and looked great... that's all I got.

Yeah, that's sort of the unfortunate reality of the movie -- you can really only celebrate bits and pieces of it. What they did right was really memorable, everything else -- poof!

I actually loved it as a kid, and when I re-watched it last year for the first time in quite a while, I was surprised by how much of it stuck with me.

I'm a little surprised to hear that it's so disliked. It definitely has its problems - the main issue for me is that in spite of using a cast of mostly well-known actors, they're all at a point in their careers that makes you feel like you're watching the sci-fi equivalent of a Love Boat episode. The robots are trying way too hard to be the next R2-D2. The ESP thing feels like they felt the need to cram every sci-fi trope they could into the film.

But the effects hold up well, the set design is great, and much of it is surprisingly dark for a film trying to cash in on the Star Wars craze.

All I basically remember about "Captain Nemo in the Outer Space" was the annoying floating robots and the fact that Ernest "McHale's Space Navy" Borgnine was in it. Why they did not turn him into a robot and call him "BORG-9" is a mystery.

I love the Black Hole and it's proto-Event Horizon aesthetic. I even owned the storybook/record combination back in the day.

I understand it's a hard film to enjoy. But I think it's worth the watch. It's a live-action Disney film with on-screen murder, humans transformed into automatons, and the plunging of the villain into a literal Hell. How many of those are there?

There are at least two of us BLACK HOLE fans. I love the misguided attempt to squeeze R2D2 into a scifi/horror hybrid. Whatever shortcomings the story (and casting) have, they are more than offset by the awesome score and fantastical visuals. Love it.

Fun fact: more than half of the movie's $20 million budget was spent on Slim Pickens' attempt to actually have his consciousness placed in a robot body, thus gaining cybernetic immortality.

Apparently issues 5 and 6 were published in Mexico by Editorial Novaro - I can find very little information on them, and there's no mention of English translations. http://www.recalledcomics.com/TheBlackHole4.php

I like the part where Anthony Perkins gets buzz-sawed by Maximilian the Killer Robot.