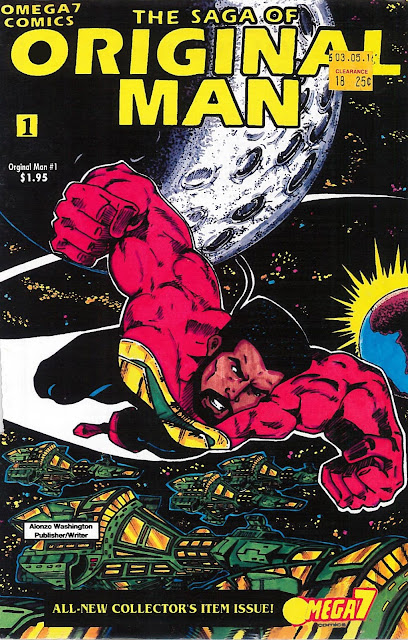 I was managing a comic book shop back in the Nineties when the Milestone titles first debuted, and they had me hooked from the beginning. I also tried my damnedest to spread the word on these books, which combined some genuine young powerhouses (John Paul Leon, Tommy Lee Edwards, Denys Cowan and ChrisCross were nothing to sneeze at, not to mention Dwayne McDuffie and the rest of the writing crew) and were, of course, about as different from everything else on the rack as possible. DC and Marvel had a few black superheroes who'd occasionally make cover appearances, but Milestone had these same characters in abundance, written and illustrated largely by creators of color.

It was exciting as all diversity is meant to be exciting; because it introduces new stories into a closed and banal system of the same stories of wonder and adventure rendered quotidian by their repetition. It was new, and different, and I was always eager to recommend it to customers.

But, for the most part, the audience wasn't having it. On more than one occasion I pitched Blood Syndicate or Static to a potential new reader, only to have "Milestone? You mean that racist company??" spat back in my face. White people don't like to feel excluded, I'm afraid.

But Milestone was important -- I don't believe that the increasingly-diverse world of modern comics would have been possible without Milestone, and other high-profile books about characters of color created by creators of color (Speaking of which, when' re they gonna relaunch Brotherman again?).

For instance, there's ANIA, a cross-country collaboration of four companies which followed in Milestone's shoes, uniting to create a collection of books with black leads, if not in a shared universe. The three I recently found in a quarter-bin clearance actually manage to tell the tale of the dissolution of the ANIA brand, as told almost exclusively through inside-front-cover editorials ... 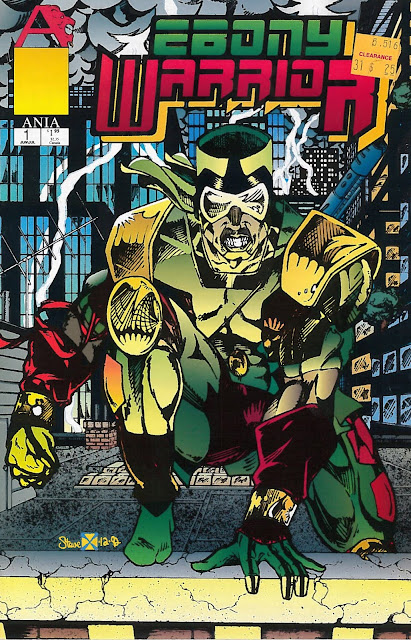 Ebony Warrior is home not just to the most traditional superhero in the ANIA/AR ranks, but to the highly optimistic editorial of company president Eric Griffin. He had the unenviable job of midwifing this collective publishing concern which was taking place in four different states, and where the individual creators/publishers had creative control and ownership of the characters. This may not end well, and it's worth keeping the phrase "stereotypes are not the norm in ANIA comics" in mind as we continue.

The Ebony Warrior tells the tale of a successful, driven, conscientious young son of a minister who returns from his college education to find the crime and death on the streets of his youth has grown out of control. Having turned down jobs from Fortune 500 companies to stay in his home, he teaches remedial catch-up classes for struggling students and volunteers at the community center doin' community center stuff. And then he dresses up like a Christmas bucket and slams crooks around.

It's a fairly bog-standard superhero/avenger comic, complete with the scene where the hero stops a violent gang rape so as to give him the gravitas of Right Ethos. That happens more in non-mainstream superhero comics than origins do.

Meanwhile, over in Original Man, publisher/writer Alonzo Washington launches his first-numbered Original Man issue (it was the Nineties, so of course there was a zero issue) with an explanation as to why he severed a relationship with ANIA. That didn't take long. Oh, and it was over a trading card license deal which, again, the Nineties...

Original Man has profoundly rough edges and surfaces, having been colored with crayons and markers (I think, it doesn't look normal, whatever the case), and lettered without guides. It's rough, but there's an unambiguous ambition attached to the execution.

Original Man fights big, bold, brash and unsubtle -- his first two foes include The Enslaver and the Aryan Avenger, for instance -- but he also fights in a world a little less by-the-numbers as Ebony Warrior. There are riots, looting, over-zealous police responses, political speech and fairly relevant issues of the day (presented in the coloring book style of the title, of course) BUT there's also the mandatory scene of a violent gang rape being stopped by the hero. That's two in a row! 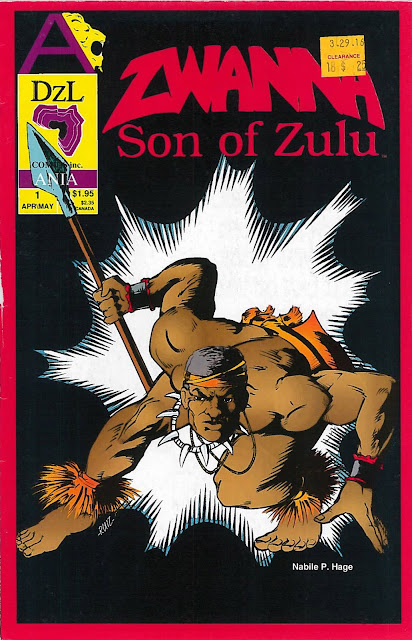 And, lastly, there's Zwanna, Son of Zulu. This is where that bit about stereotypes not being the norm in ANIA comics will return to our dialogue. All set? Okay.

Zwanna is an aggressively militant prince of an African nation (what, do you think he's from Bismarck?), having traveled to America to attend Black American State University (Go Badgers, maybe!) There, he's free with his often-violent viewpoint of pre-emptive strikes, all of which finds great approval from his teachers and fellow students alike. They're right, universities ARE bastions of Liberal thought!

While the universities are okay with this, the Focal Spy Company is not, and they use Zwanna's words to launch an operation against his homeland. This falls into the hands of operatives Georgina Shrubs, Rhoda Rayban and Jamie Carter (no relation to James Carter of The Crusaders, but maybe to the former president, I dunno). And here's the thing about them...


They are obnoxious caricatures of cross-dressing homosexuals, or transgender individuals, or I don't know but it's not kind or rational. For a company which promised to leave stereotypes behind.

Anyway, Zwanna is ultimately captured by these transvestite warmongers, despite his power to "Zhaab-Out" when he, like Captain Marvel, utters his magic word in order to access great power. Primarily he uses it to stop a violent gang rape in an alley, which is beginning to feel a little familiar.
at 9:00 AM

It seems pretty obvious that the other part of the (supposed) joke is that the three bad guys in Zwanna appear to be "emasculated" versions of the last three Presidents of the United States at the time of publication. (Scare quotes because, you know, depicting thinly veiled surrogates of the current and former leaders of the free world as homophobic stereotypes is, like, totally subversive and really sticking it to the man, right? I'll bet this comic came right to George Bush's desk--he had a guy for that kind of thing--and he was speechless with rage that "Georgina Shrubs" is depicted in lipstick and fishnets and a bodysuit like the one Jennifer Beals wore in Flashdance; he shot down Japanese fighters in World War II, the manliest war ever, by God, and now this?!)

Which, you know, is in no way a defense of what has happily become an offensive stereotype but somehow feels in keeping with the in-your-face political incorrectness of '90s LGBT-hostile comedy or satire. Which, I want to be clear, isn't meant to defend it. As political comedy, it's more in the vein of an Andrew Dice Clay emission than a Toles cartoon.

The '90s was a good decade for me in a lot of ways (I was in college and law school for most of it, 'nuff said), but there are things about the era I don't miss and am happy to see vanishing in the rearview mirror.

I was distracted by the multiple gang rapes, but that's definitely the meaning of the gag. I missed it completely... good looking' out!

And, yeah, 90's ironically racist/sexist/homophobic comedy was certainly the middle class white male's big gig, which was unfortunately reflected both in the early days of this blog and my aborted stand-up career. Live and learn, I guess...

Because I am a glutton for punishment, I raced to eBay and scored a copy of Zwanna, Son of Zulu immediately after reading Mister Kitty's review. How could I not? Just read the author's without-Geritol rap at the end of the issue! Mister Kitty's review ends with this tidbit: "the author of this comic was once arrested for dressing up like Zwanna, climbing the Georgia State Capitol building, and tossing comics to the crowds below."

As for '90s comedy...some people grow and mature; others cling to the "good ol' days."