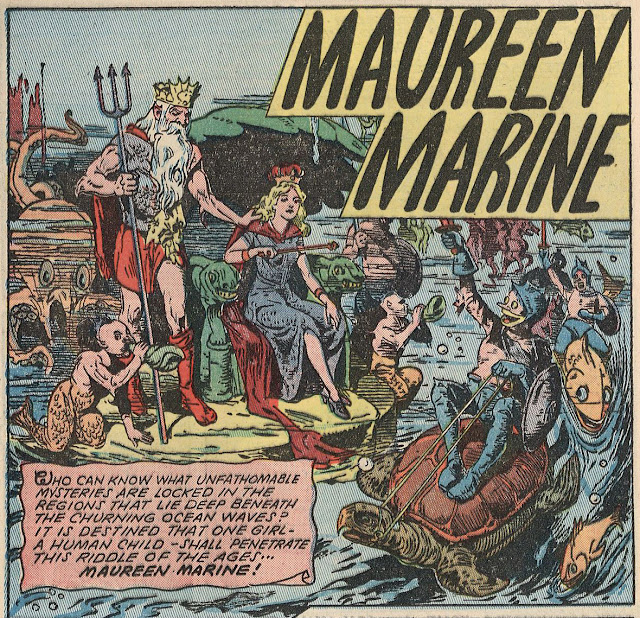 As I mentioned a few weeks ago -- and bring up every now and again -- there's absolutely no rougher origin in comics than having to gain your powers by dying first. Just because of how comics have shaken out, you're mostly likely safe from this particular kind of origin unless you're a cop, in which case you represent about half of the avenging ghosts out there.

Another significant category for superheroically snuffing it falls unhappily on children. Kid Eternity was famously the victim of a Nazi U-boat whose missile shattered the small vessel on which he and his older relative were harmlessly traversing, then was informed in the afterlife that it was before his time and should return to Earth with strange powers. Ditto for Maureen Marine. 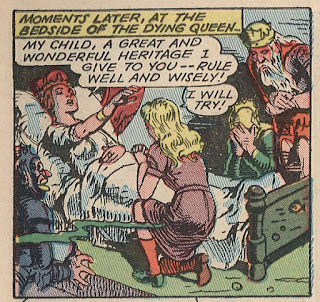 Actually, there are a few small differences and a couple of significant ones. Maureen did indeed drown after her father's ship was struck by a U-Boat's torpedo, but she neither dies nor is informed that she'll possess great powers as a compensation for this sort-of divine bureaucratic error. She also doesn't return to Earth, but emigrates to an undersea kingdom. She does drown, though. She majorly drowns. Like, they spend way too long on showing it.

Slipping under the water, Maureen is happy to find that she's not drowning! And, in fact, she can breathe! And that a welcoming committee of undersea fish men on seahorse steeds and a Neptune dude on a turtle is approaching her, arms outstretched, to make her their new queen. Yes, Maureen is suffering oxygen narcosis, and has hallucinated the whole thing. She's dead now.

It is, in fact, Father Neptune who saves Maureen from drowning. But he doesn't do it for no reason. No, it turns out that Atlantis, the undersea kingdom he calls home, is served by a dying queen. Not only is she the queen, points out Father Neptune, but she is the only female human being among the teeming throngs if Atlantis. My guess is she's just tired from getting totally fucked out.

With the old queen, her crotch complaining viciously about decades of constant use, perishing before her eyes, Maureen is given an offer; become the new queen. This is suggested right after Neptune informs Maureen that the old queen had been poisoned. I would think over that question very, very hard, Maureen.

Maureen becomes the new queen of Atlantis, proving herself to be a military strategist par excellence even as she exhibits frighteningly lax survival instincts. She routs an invading army of vicious "Miromen" on their way to conquer Atlantis, and is additionally responsible for keeping a horde of water-breathing Nazi dickheads at bay until Father Neptune could murder them. You get used to that stuff in Atlantis.

Part of the easy acceptance of the visually mellow Maureen Marine feature was the artwork of Harold DeLay, a book artist whose work was in the vein of turn-of-the-century products like Little Nemo in Slumberland.

The dream-like quality of the strip is enhanced by the strange, non-euclidean biome of Atlantis and its surroundings, an undersea land not only boasting its ride-able turtles but also centaurs -- literal horse and man people, just walking on the ocean floor. Davey Jones also shows up, dressed like a third-world dictator.

Maureen is, naturally, part of the Blue Circle Comics record of excellent Golden Age strips, and therefore hasn't been seen since her sixth and final adventure. My guess is she got "poisoned" oh probably around 1967. If she's lucky, they won't send her back to Earth.