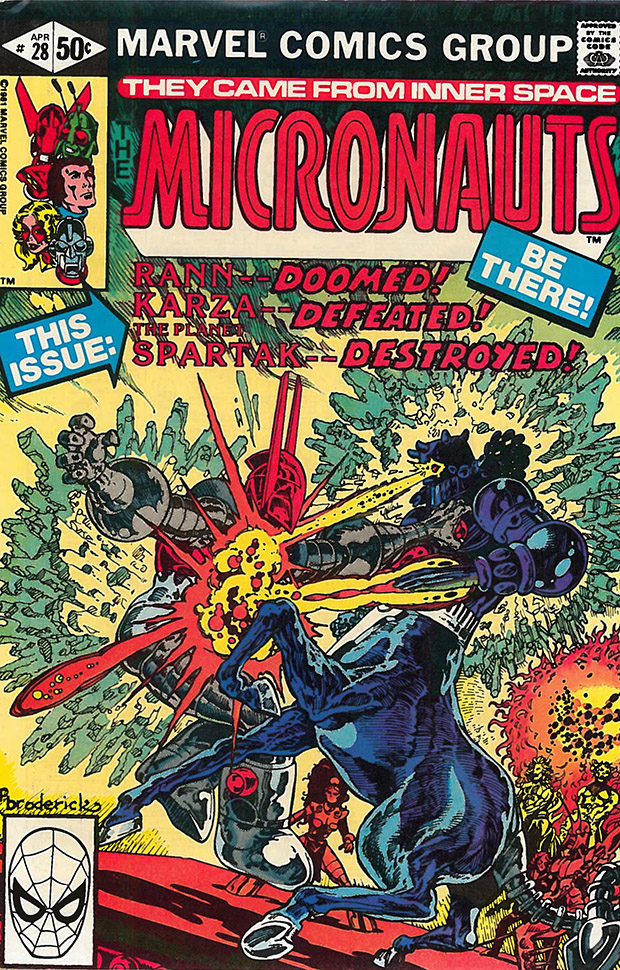 I want you to look at the cover to this issue of the Micronauts and come to realize something: This is all I ever wanted from this book. All I've ever wanted from this book has been for mysterious, tortured armored warrior-king Acroyear to engage in a knock-down, drag-out, laser-happy deathmatch with grimly regal conqueror king/centaur Baron Karza. This is it. I'm content.

I was reading this issue on the couch next to my wife, and I was making such a racket of unprompted "Whoa"s and "Holy shit"s that I ended up having to explain everything that was going on in this issue. And I sounded like an insane person.

Here we go, let's see if you have the same tolerance for exciting inanities as my wife has, and then you can all be my new spouses: Karza maintains command over an enormous branch of would-be world-conquering Nazi spin-offs HYDRA, as well as fleets of exceptionally powerful ships and arms from the Microverse. From a hidden base under a thinly-disguised simulacrum of Disneyland (or -World, the latter being more likely for its Florida location), Karza launches his attack on Earth, planning on using our world's weapons to dominate Homeworld and the Microverse on his return.

Defying him are the forces of sci-fi espionage agency SHIELD, led by Nick Fury and one of comicdom's most fun characters, Dum Dum Dugan. A passel of surviving Micronauts assists him aboard their ship, The Endeavor, minus some important personnel: Biotron, Arcturus Rann's factotum and telepathic partner, is presumed destroyed, while Princess Marionette is also believed to have been killed by Karza, but actually has been in the Microverse, rallying allies.

HYDRA has successfully knocked out communications between SHIELD forces on the ground and their reinforcements back at homebase. In fact, they're not just locked out of communications -- Karza's Dog Soldiers blow the holy hell out of them, locking off Fury's much-needed backup (The Avengers are also called but respond to the garbled communication with surprising incuriosity. At least they don't get blown up).

The skeleton crew of the Endeavor  - Insctivorid thief Bug, Spartak prince Acroyear and his mate Cilicia, the surviving (and grieving) roboid dogsbody Microtron, and mysterious (and alleged) Spartak soldier Dagon. who is clearly hiding something behind his faceless armor -- fight the good fight in Fantasyworld. Meanwhile, Homeworld regent Marionette, along with former rebel leader Slug and chief of the Aegyptan desert raiders Prince Pharoid, assault the Body Banks which were once the source of Karza's power and influence, where his faithful soldiers and terrifying, faceless priests of death stage a violent vigil, awaiting their Lord's return.

Arcturus Rann, thousand year-old explorer of the Microverse, is trapped alongside his other-dimensional self, the Time Traveler, hooked up to a strange, seemingly organic mechanism which drains them of the powerful but unknowable energies of The Enigma Force. Karza's forces overwhelm the heroes and Karza stands prepared for triumph. And then ... then Acroyear happens. 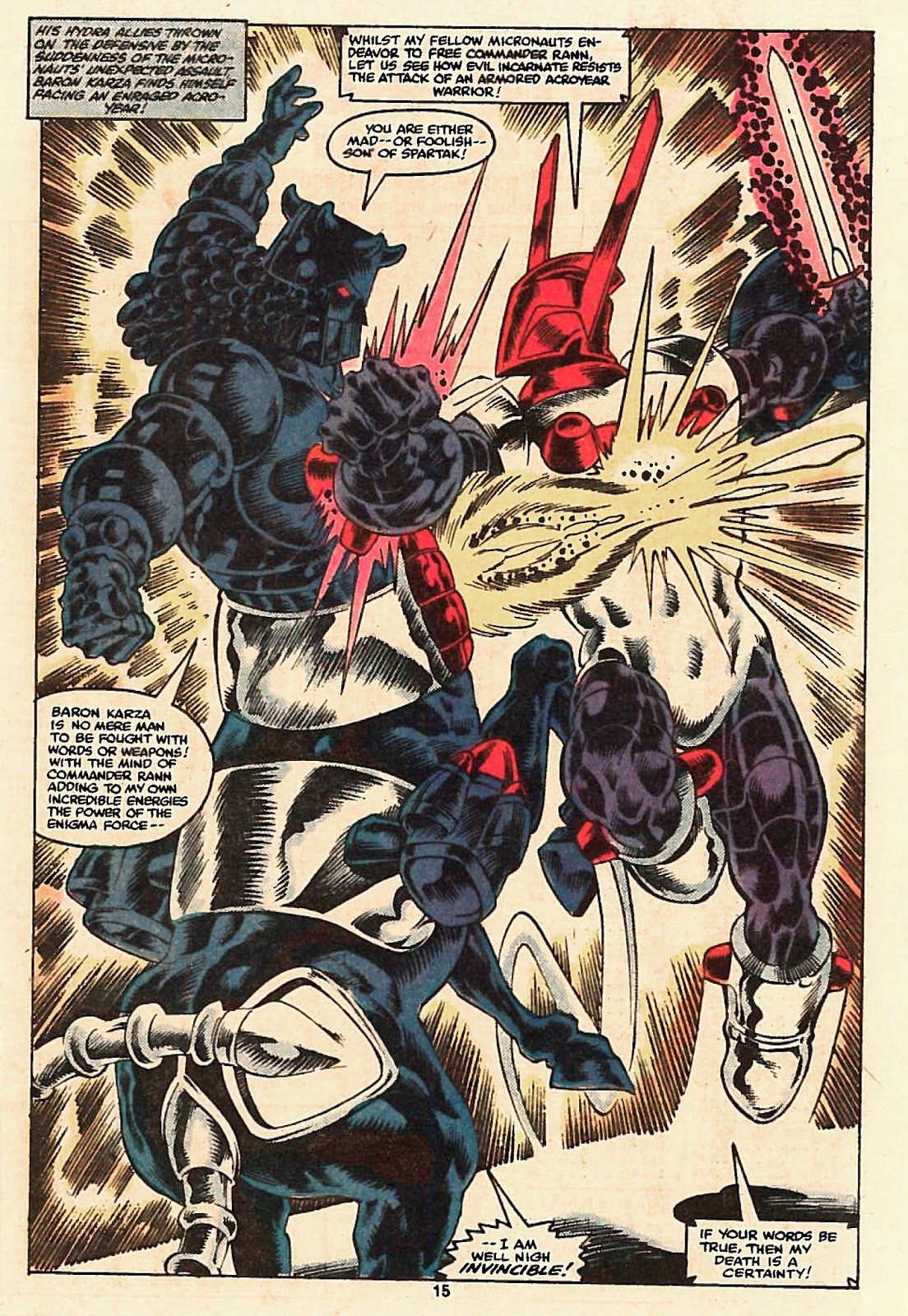 It's no secret that Micronauts borrows a lot of influence from Jack Kirby's Fourth World saga, an epic which is -- in part -- built around the inevitable final conflict between scion of Apokalips Darkseid and his biological son Orion, of the New Gods. The thing about that final battle, though, is that there are other characters whose connection to Darkseid requires some sort of decisive, thematically narrative resolution: His adopted son Scott Free, his brother and opposite number Highfather, the philosopher rebel Himon and, lastly, Superman. And the question is ... who does what in the final battle? What role do these characters play in what will undoubtedly be a contest which comes down to Orion and Darkseid?

Well, that's the same question here. There is not a character among the Micronauts who doesn't have just cause to hate Karza, even though the battle will always come down to Karza versus Rann. And who, among the Micronauts, should be the one to set Karza up for the final hit -- who loosens the lid on the pickle jar for Rann?

How about the noble, armor-clad super-king of an alien warrior people, trained as he is in the glory and fortune of war, itching for a fight, carrying a big ol' sword and shootin' laser beams out of his clavicle? Who's the purple-skinned Spartak who's a sex machine to everyone from front to back? Acroyear. You're damn right.

I am a massive fan of Acroyear, I've come out of this recap series just wanting every comic to be about Acroyear. He is my waifu. Or I'm his. Either way, I love my boy A'yo. This issue was made for me.

While A'yo battles Karza, Mari returns with reinforcements from Homeworld. This is good timing. Spurned and humiliated Shaitan -- Acroyear's albino, usurper brother -- avenges himself on the abuses of his master Karza by shutting down the Force Wall portal which allowed his armies to pass through. Ships still within the corridor are lost forever in the space between universes. 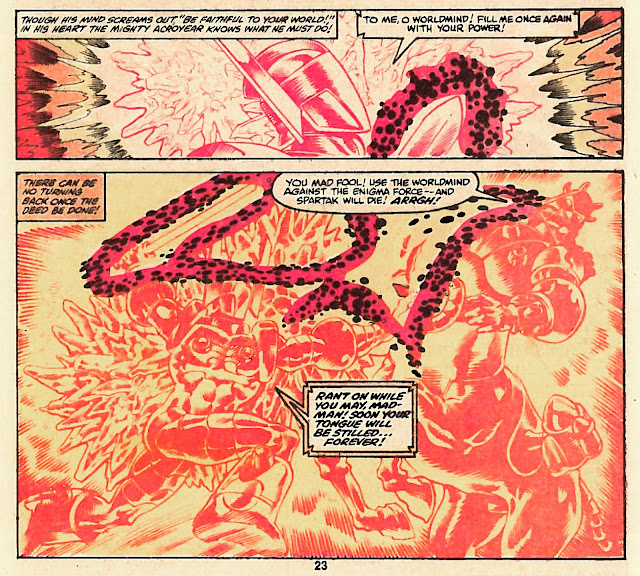 As Acroyear and Karza battle -- represented increasingly in that cool red-ink thing that early '80s comics used to do -- the other heroes come to the grim realization that, as Karza has tapped into the Enigma Force, every blow struck against Karza injures the still-held-hostage Arcturus Rann equally. Acroyear must kill Karza, but it will also mean the death of Rann -- and more.

Shaitan, proving to himself the right he has to command the throne of Spartak, takes advantage of his bloodline's connection to the Worldmind, the spark of life which makes their harsh homeworld capable of supporting the Acroyear race. Woith that power added to Acroyear's own, it's not only Rann's life on the line -- the entire population of Spartak, as well as the planet itself, may not survive the battle. HOLY SHIT THIS IS GOOD.

While the battle rages, Bug takes out some of his frustration and resentment on the empress of his people's race, Queen Esmera of the Insectivorids. Accusing her of willful inactivity in the face of Karza's initial wave of conquest, Bug is really ladling it out on a character we only met last issue. I hope no one got attached, because she's not long for the world. Shamed by Bug's words, Esmera unveils her deadly royal legacy -- the Suicide Sting, a menacing-looking stinger on her weird ol' tail-butt -- and, in the midst the battle -- jams it right into Karza's back! The distraction is just enough for A'yo to harness the wild power of the Worldmind and strike -- destroying Karza and freeing his host body, prince regent of Homeworld and former rebel leader Prince Argon.

Karza's malevolent essence is scattered to the winds. His forces are lost or destroyed, HYDRA has been routed, and both Earth and the Microverse are free again from his tyranny. However. Rann is a braindead vegetable, beaten physically and mentally by Karza's torture and his sympathetic injuries during the battle. The Spartak homeworld may be destroyed, or left without life, after the Worldmind's power had been spent. Whither the Enigma Force? And what of Biotron, still dead as of this issue? I dunno. I'm reading this one issue at a time.

This issue was great. I'm exhausted. I hope the next one involves a poetry reading or something, because otherwise I'm gonna need pills for hypertension...
at 9:00 AM

There are only 3 comic book series I own a complete run on:
1. Kamandi
2. Legionaires (Legion of Super Heroes)
3. Micronauts

Its a joy readin these and knowing that they are every bit as good as I remember!