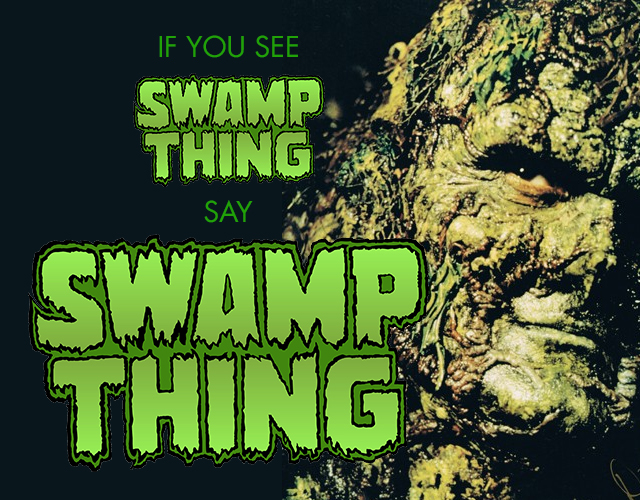 Yo ho ho! Arr matey! Bottles of rum! Steven Spielberg's 1991 motion picture Hook! Yep folks, they've finally gotten some pirates into the heavily-trafficked community of Houma, Lousiana -- a moment I'd been dreading! Having previously established that Mayan priests, Egyptian mummies, swamp maidens and other supernatural heebie-jeebies had regularly seeded the Universal Studios backlot with plotlines for future episodes, I assumed that pirates would be inevitable. And why not? There's actual pirate history in Louisiana! Why, it would almost be a crime if it turned out to be some sort of switcheroo!

But were they inevitable? No, because although the episode opens upon a pair of piratey-types (James Zelley, Danny Hanneman) burying treasure by a bilge-pond -- their actions noted by the handsome, lantern jawed pirate Red Reiger (played by I have no idea. He's uncredited) --  it's actually a switcheroo! They got me!


It turns out that the pirates are actually a pair of slapstick stage-hillbillies (still James Zelley and Danny Hanneman) and that the handsome pirate secreted behind a nearby fern was actually tiny weirdo Josh Reiger (The Sandlot's Shane Obedzinski, I guess, I've never seen it).

Peeping Josh has recently lost his dad and his imagination's going a little out-of-control. Part of this rampant make-uppery manifests itself in his fascination with pirates. The other part manifests itself in the fact that he just tracked two drunk, desperately stupid swamp idiots into the middle of a shit-holler in order to keep careful track of where they buried their "treasure." That'll go over well!

The "hillbillies" (don't blame me, it's what they were called in the episode) notice Josh watching them, and chase him off. They would have done worse except Swamp Thing just straight clotheslined them. He looked like Refrigerator Perry if he were also a landmass. Which Perry sort of was, I guess.


Back at Josh's home, we're introduced to his long-suffering mother -- a creature propelled entirely by frustration (Kathy Neff). With her husband recently deceased, she's handling the simultaneous grief and her hyperactive frogspawn with barely-restrained slaps. She berates Josh for his over-active imagination (which, to be fair, did almost get him murdered by drifters in the swamp. He has an imagination so over-active that it requires a living god of nature to keep him from getting snuffed and buried in a beer cooler. Honestly, his mom's criticisms seem reasonable). Josh nonetheless runs away.

Arcane is, meanwhile, getting angry in the woods. The hillbillies are apparently under Graham's supervision, and Graham neglected to predict that they'd get drunk on cheap beer and bury the "treasures" in the wrong spots. Turns out that the treasures are actually weird boxes which Arcane invented and which will flood the swamp with biome-altering amino acids.


Later in this episode, Swamp Thing will briefly muse on the delicate balance of natural influences on the ecology of a region, which is a little more than I expected from this show. Swamp Thing is nominally eco-positive, but they usually just slap a hamhock-heavy "NATURE GOOD" metaphor in the voiceover at the end and call it a 30.

A large part of the episode ends up being devoted to pursuit of the hillbillies through the swamp. Arcane is manning a base station and Graham and two rent-a-cops have taken to the field. Swamp Thing manages to corral these two escapees from a Blue Collar Comedy sketch and, with the magic words "Look out, the fence is electrified," scares them right into an electrified fence, killing them. Well done. No pun intended.


With the hillbillies thankfully dead, Arcane has no way of finding his buried cases. Luckily, Josh had spent his pursuit of his imagined "pirates" drawing a map of all of their locations! I should have mentioned this earlier, it's important.

While Graham surprises his boss with one of these cases, retrieved at the Reiger yard sale, Josh remains ran-away. He's captured Swamp Thing, in a scene which would be more charming if we didn't know that the big rutabaga goes around collecting damaged children to act as his personal attaches.


In response to the ranning-awayness, Josh's mom has called the only man who can help -- Will! A poor choice, but Houma's a small town with limited options. Also, either Kathy Neff decided to play Mrs.Reiger as a savage cougar barely in control of her seething attraction for Will or, um ... I don't know, I don't need to be a part of that. She kneads his upper arm like bread dough at one point. Life is long. I've seen too much misery.

But the scene is given one of its finest moments when Mrs.Reiger sneers at the swamp for claiming her husband and possibly her son, and Will replies "It's not the swamp's fault." His tone is like, "The swamp has a good heart, it just comes on a little strong sometimes. Give the swamp a chance. I have a lot of high hopes for that swamp."

Arcane invades the Reiger house to discover how they'd come into possession of one of his cases. He turns the dial to 11 right out of the gate, torturing the mom in a glass-front toaster oven and making the kid (now retrieved) watch. Did he even ask first? I would have asked first.

Armed with Josh's treasure map, Arcane pursues his lost cases. Will sneers "The jerk's trying to destroy the swamp ... again?" and that's how I know we're in the run-up to the conclusion! They've stopped particularly caring!


Unable to personally attend to Arcane as he is using swamp magic to disable Arcane's crazy new plan, Swamp Thing does SWAMP SHAZAMS on Josh! The little boy is turned into his hero, Red something or other, and does battle with Arcane! With swords! And Arcane actually does the thing where he holds the sword under his arm to make it look like he'd been stabbed, like a fourth-grade production of Peter Pan. Badass. It always gets best in the last three minutes, largely because it's about to end.

Josh stabbing Arcane gives Swamp Thing plenty of time to disassemble all of Arcane's machines. Arcane's wounds heal, Josh turns back into a little boy, he's reunited with his mother and then they end this way, with Josh saying from nowhere "It's like dad always said, a man's gotta do what a man's gotta do." At no point prior to this moment in this episode had that been mentioned, or had his father saying anything been part of anything. What the hell. Anyway, now it's over.