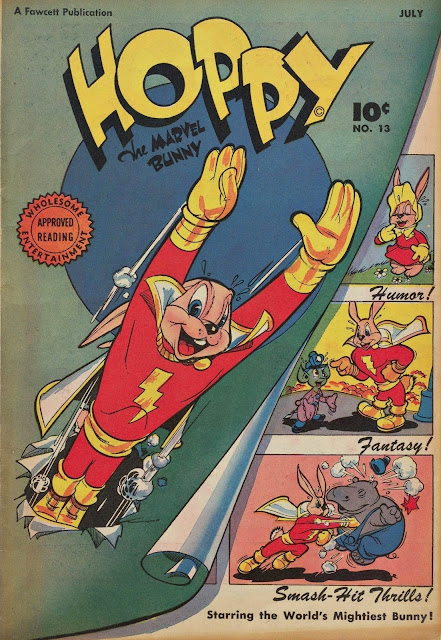 In the 1940s, Captain Marvel – now usually referred to as Shazam – was one of the best-selling superheroes on the market. In no small way, the secret to his success wasn’t just the breeziness of his adventures or the charm of the characters, but how easily Cap could expand his franchise.

The Golden Age’s other big player, Superman, was the product of a long-demolished alien world. It would later take a decent amount of contrivance and explanation to justify adding his cousin or pet dog into the picture. Conversely, for The Marvel Family, expanding the roster was as easy as sharing a Netflix password. Speak the right word and practically anyone in Cap’s universe could sport the wisdom of Solomon, the strength of Hercules, and the rest of abilities from Shazam’s acronymic catalog of superpowered sponsors.

And helming two more titles, including an eponymous anthology book was – Hoppy, the Captain Marvel Bunny!

Contained in his own separate universe and debuting in Fawcett’s Funny Animals #1 (December 1942), Hoppy was a creation of veteran animator Chad Grothkopf. Given tremendous editorial freedom with the kid-oriented title, Grothkopf not only whipped up the entire cast and wrote their adventures – from cowboy Billy the Kid to detective Sherlock the Monk to Benny the Beaver and Willie the Worm and so on – but also fully illustrated, colored and lettered almost all of the individual strips!

Hoppy was Funny Animal’s sole superhero, as well as the recurring cover feature on more than sixty issues. He’d later headline his own title for an additional fifteen issues. As funny animal characters go, in comics, this is evidence of some bonafide celebrity.

The hero of Funny Animal Land, “Captain Marvel Bunny” is secretly Hoppy, a timid pink weakling who is often a target of ridicule and derision. After losing his girlfriend Millie – the prettiest pink bunny in the land – to mocking Snip the Rang-A-Tang, Hoppy fumes about his helplessness. “Wish I was strong like Captain Marvel,” he muses, indicating that Cap’s adventures are top sellers even in a world of cartoon beasties.

Hoppy, at this moment, chooses to roll the dice on magic being real. Recalling, with surprising difficulty, Cap’s magic word – SHAZAM! – Hoppy is transformed into the dynamic and heroic Captain Marvel Bunny! In short order, he reclaims his dignity by knocking Snip on his ass, and frees Funny Animal Land from a trio of fascist funny animals who’d enslaved the populace to work in their canned food factory. Hoppy throws those nasty Nazis into a sausage grinder, in case you were wondering if Hoppy goes hard.

Decked out in a duplicate of the original Captain Marvel’s big red union suit, Hoppy also possesses his own animal-centric version of Cap’s powers:

Thirty issues in, it’s established that an aged Wizard Bunny has been invisibly responsible for Hoppy’s transformations all along. What must have been frustrating for the Wizard was Hoppy’s tendency to forget his magic word with alarming frequency. On separate occasions, everything from the mystical emanations of a crystal ball to Millie’s snoring has reminded Hoppy of his key phrase. He was, most commonly, reduced to simply reading it out of a nearby, discarded comic book.

Captain Marvel Bunny and his funny animal world were kept separate from the rest of the Marvel Family, except for group appearances in occasional advertisements. Still, in Fawcett’s Funny Animals #32 (October 1945), Hoppy was bedeviled by an infernal Captain Black Bunny, his equal in strength who strongly resembled the villainous Black Adam. Hoppy also meets a future version of himself in Fawcett’s Funny Animals #23 (October 1944) in a story which resembles a Captain Marvel adventure in Whiz Comics #41-42 (April 1943). Leero the Wolf (Fawcett’s Funny Animals #4) mentions that his inspiration to do evil comes from reading about the comic book villainy of Doctor Sivana.

However, Captain Marvel Bunny has a rogues’ gallery uniquely his own: He most frequently clashes with the high seas pirate Kid Perch. There are other nominative super-villains, like Mr.Rumor, Mr.Sorcerer, Dr.Frog, an absolutely under-utilized sentient bundle of straw and stick calling itself The Black Broom of Evil (Funny Animals #20), and a slippery escapologist named Rufus Slyfox. Captain Marvel Bunny repeatedly becomes entangled with the Catwitches, which appear to represent an entire community of magic-using evil cats in Funny Animals Land.

All told, Captain Marvel Bunny boasts a roster of baddies that numbers in the dozens. For many of his stories, however, Hoppy acts as a mediator among anthropomorphized forces of nature. He settles the dispute between the North Star and the Evening Star in Fawcett’s Funny Animals #26, among the four winds in issue #29, and also among the Brownies, the Storm King, and the Mountain King in other issues. He’s like a referee for wind disputes.

Hoppy’s adventures were explicitly written for kids, but Grothkopf’s flamboyant brushstrokes made for an exciting series of visuals.

Fatigued by lawsuits, Fawcett stopped production on its comic book line in 1953, tanking the Marvel Family in one fell swoop. Hoppy’s adventures were subsequently sold as part of a bundle to Charlton Comics, where they were reprinted under the title of Happy the Magic Bunny. His previously published stories were lightly edited - his emblem removed, his costume sometimes recolored blue – and lived on in reprints in Atomic Mouse #16-20 (1954). Hoppy’s magic word was relettered to be “Alikazam!”

Happy was retired by the mid-50s, and the original Hoppy didn’t enjoy another outing until a brief crossover with Superman and the rest of the Marvel Family in the early 1980s (DC Comics Presents #34, June 1981). He appears again among a cluster of famous talking rabbits in the off-beat DC miniseries Captain Carrot And His Amazing Zoo Crew In The Oz-Wonderland War Trilogy (CCAHAZCITOWWT #1-3, 1986). Sheldon Mayer’s Bo Bunny joins Hoppy and Millie as DC’s representation among the other public-domain hoppers.

Hoppy’s last appearance in this familiar form likely happens in the post-Crisis Power of Shazam #29 (August 1997). The loose concept of a Shazam-powered rabbit named Hoppy remains part of DC’s Tiny Titans universe of characters, but most other subsequent Hoppys have explored the concept more broadly. In superhero universes that have little room for more than one funny animal superhero at a time, Hoppy continues to reside at the edges of the Shazam universe, possibly just trying to remember his oft-forgotten magic word. 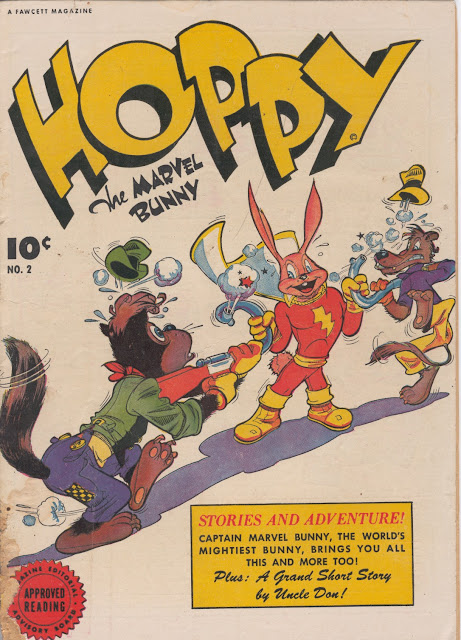