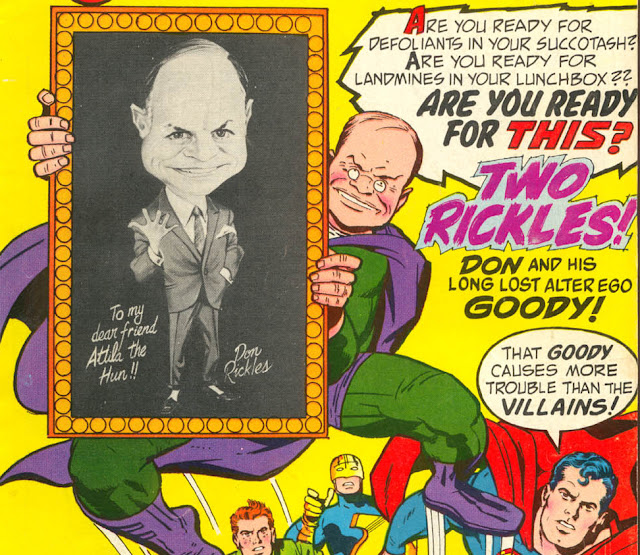 What with my most recent book -- The League of Regrettable Sidekicks -- having been nominated for an Eisner award in the category of Best Comics-Related Book (pardon me for going out of my way to mention it), I've been poring back over my notes for the book, and re-reading assorted entries here and there. This is the expected behavior, I'm just doing what any new nominee would do -- drink in my own brilliance. Oh, me -- what a wit!

Goody Rickels stands out in my imagination, whether regarding League or not. No one is understating the impact of Goody Rickels on comic book history when they describe the decision to invent said character as "wildly incomprehensible and certifiably insane." He's one of those characters for whom the explanation of his origins -- in this case, merely that Jack Kirby was a fan of the comedian Don Rickles -- does nothing to clarify any subsequent decision made involving him. If you start at "Kirby was a fan," there's no straight line that leads to Goody Rickels. 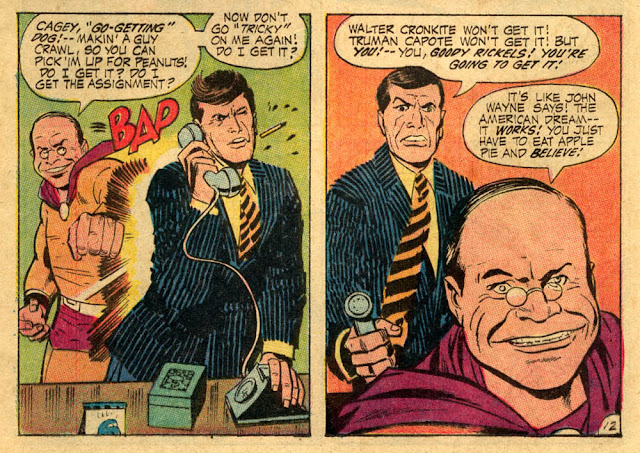 For the record, and just in case you are somehow unaware, I'll do my darndest: Debuting in Superman's Pal Jimmy Olsen, Goody was the exact duplicate of Don Rickles -- supposedly nicer than his "hockeypuck!"-hurlin' inspiration. Despite the similarly-spelled surname, they weren't meant to be related, but Goody possessed even Rickles' speech patterns and relentless insult patter. Then, also, he worked for WGBS, fell for a prank that involved dressing up as a superhero, then swallowed grain-sized incendiary devices while fighting the legions of Apokalips alongside Jimmy and The Guardian. As you will.

Of course, he's really just another entry in the list of celebrity appearances in comics, despite having been gloriously vajazzled by way of the trademark Kirby imagination. Goody follows Anne Blythe, Antonino Rocca, Orson Welles, Allen Funt, Pat Boone and probably literally a hundred other celebs of assorted media in the pages of Superman-related books alone. 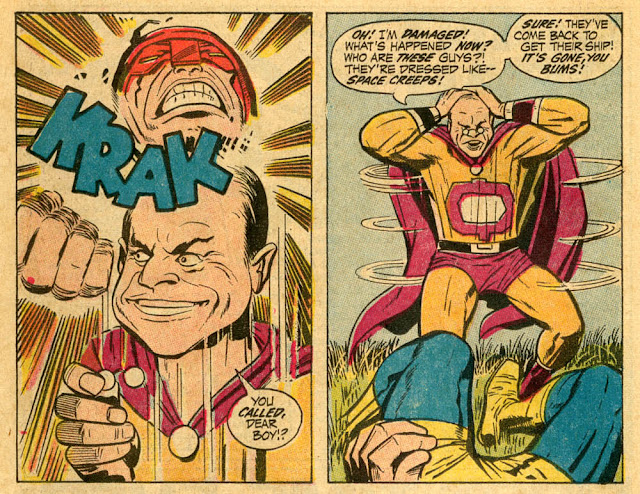 Never mind other titles where superheroes romp with comedians -- Spider-Man and the Not-Ready-For-Prime-Time Players or the Avengers on Letterman were one-time oddities, but they're in pretty good company these days. I know that Colbert and Leno have made their appearances in assorted comics with mainstream heroes. Probably Bruce Vilanch has too. Hell, probably they got superheroes doing Match Game now, how would I know? Anyway, my point is that Don Rickles' unrelated but similarly-named duplicate dressing as a superhero and fighting Darkseid is weird but we've lived long enough for that issue of Power Pack where Whoopi Goldberg was a Galactus to happen.

Labels: The League of Regrettable Superheroes